close
With The Ugly Truth, Katherine Heigl will try to claim the throne once occupied by Meg Ryan and Julia Roberts. 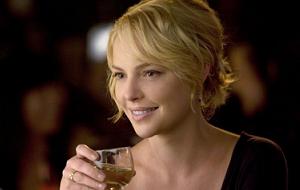 America is still searching for its next cinematic sweetheart.

In the ‘90s, both Julia Roberts and Meg Ryan served that role nicely, starring in a series of successful romantic comedies which cemented their status as reliable rom-com draws.

Today, the field is cluttered with potential sweethearts, from Reese Witherspoon to Kate Hudson and Katherine Heigl.

Heigl, the Grey’s Anatomy star who parlayed television success to movie theaters with Knocked Up, tries to one-up her acting sisters July 24 with The Ugly Truth. The R-rated romance stars Heigl as a TV producer forced to deal with a boorish shock jock type (Gerard Butler).

If Heigl’s Truth lands her that coveted position it won’t be a shock, says Scott Robson, editor in chief at MovieFone.

“She definitely has that potential. She was terrific in Knocked Up and 27 Dresses,” Robson says.

A good rom-com actresses must be accessible, not intimidating, adds Robson. That's why you probably won’t see Angelina Jolie or Megan Fox starring alongside Ryan Reynolds in some frothy comedy any time soon.

“Guys couldn’t even to begin think they have a chance with them. But you can watch a Kate Hudson movie and think, ‘maybe …,’” Robson says.

The effect isn’t just for men in the audience.

“Women like to see themselves in that way, too,” he says. “Women may aspire to be Angelina Jolie or Megan Fox, but more realistically they can see themselves more like an Anne Hathaway.”

Recent romantic comedies have given audiences a number of attractive, talented actresses, from Hudson to Sandra Bullock.

“But there isn’t really a clear cut queen of the romantic comedy at this point,” he says.

Robson blames a system which overloads movie theaters with product.

“Hollywood is putting out four times as many movies as they did during the Meg Ryan era,“ he says. “There’s room for all these different women.”

The more romantic comedies hit the market, the less likely one particular actress will step up and lead the genre. But that’s still good news for actresses overall.

“There’s more opportunity for these women to step up and shine,” Robson adds.

Dennis Toth, a movie consultant and film financing consultant with New York-based R&R Consulting, says current audience tastes are so fragmented it hurts the chance of a single actress emerging.

Ryan also was able to do something few modern actresses seem able to do—create a distinctive persona, Toth says.

“Her characters managed to hover somewhere between Katherine Hepburn and Doris Day; simultaneously down to earth and ethereal without any extreme sense of undo irony,” says Toth.

It didn’t hurt that she often graced movie houses alongside Tom Hanks, one of this generation’s most complete actors.

“It takes two to tango in romantic comedies and Ryan was extremely lucky in her screen partners. There hasn't been this strong of a match up since,” Toth says.