close
We caught up with Judd Apatow to discuss Funny People, the writer/director's bittersweet new film. 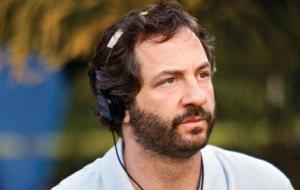 For a while, it looked like Judd Apatow was involved with every funny movie in theaters. After The 40-Year-Old Virgin, Apatow’s directorial debut, his name was used to market about any comic title with which he had association, making him look like the seal of approval for the modern American comedy. His friends figure prominently into his projects. Paul Feig, Seth Rogen, Paul Rudd, Martin Starr and Jason Segel are familiar faces, most of whom he worked with on his television shows Undeclared and the wildly adored Freaks and Geeks. Apatow’s humor consistently marries crassness and sweetness and always, always focuses on the plight of the adolescent man.

His newest film, Funny People, which is only his third writing/directing effort, plumbs slightly deeper territory. In turns poignant and sanguine, this story about a highly successful but equally spiritless comedian (played by Adam Sandler) looks towards the late middle age of a man who has built a career out of both making people laugh and ignoring his own path to maturity. Apatow says, “I had a therapist who said that once you’re successful it’s much harder to get sane because your success supports your insanity.” Funny People as a whole “is a lot about loneliness and the things that support being lonely.”

Split into two parts, Funny People begins in the comic trenches. Budding comic Ira Wright (Seth Rogen) is working his way through the shabby glam trenches of stand-up comedy when he meets George, who’s angry after he has been handed a prognosis.

“People tend to have a major change in their life when they have a crisis," says Apatown. "Their wife leaves them or they get sick and they’re forced to look at their lives (and ask) am I happy? Do I like what my life has evolved into?” But the question Apatow seems more interested in here is the question broached by the latter half of the film. “When Sanders recovers from his illness (he asks himself) if he has the courage to make a change or will he go back into this rhythm he was in?”

Courage, as it relates to ambition, is a big part of the connection between Ira and George. The absence of it seeds George’s spiritual malaise, while it’s presence fuels Ira’s tenuous but resolute career trajectory.

“It’s very easy to obsess about your struggle and your climb and then, when you get there, feel exactly how you did in high school; like (the climb) didn’t actually serve any purpose—in terms of your happiness.”

Sandler and Apatow cut their teeth together at the Improv in Los Angeles and footage of their salad days, making prank phone calls and performing on stage, seamlessly pads the film during its more introspective moments. For quite some time, Apatow has been hoping to write and direct a film with Sandler, whose career took a more public turn than his. “I wouldn’t have been aware enough to write this until now. You get older and have perspective about it.”

The second half of Funny People enters the domestic sphere and features Apatow’s wife Leslie Mann and their two daughters, Maude and Iris. When Simmons presents Laura (Mann’s character) with an opportunity to leave her husband, his actions look like a retreading of his past selfishness. They also seem like a subliminal assault on Apatow in particular since the danger Simmons represents affects those Apatow loves. Apatow’s tack on morality, one that connects to every character he writes, is simple and forgiving. “I think everybody’s a nice person and everybody underneath is the same and good and then you have all these levels of shit on top of it that makes you lose your path.”

His interest in what he calls “the defense mechanisms that make people so hard to be around” likely came early in his development. He explains, “In my formative years, most everything that was brilliant in human comedy was made by James Brooks or Norman Lear and I’m sure on some level it just wired me to appreciate a certain kind of comedy: (one) that’s both funny and emotional and about people dealing with everyday issues and struggling to make their lives work.”