close
With the release of Ponyo, Disney is hoping that American audiences will discover animation master Hayao Miyazaki. 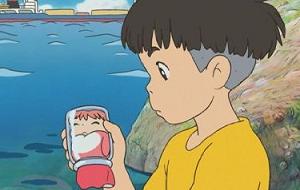 In the trailer for the new animated film Ponyo, a deep, serious voice makes a statement few animation would dispute.

“He has been hailed as one of the greatest filmmakers of all time.”

But it would be fair to say that most Americans, especially the younger audiences who flock to animated films, have never heard of the Japanese pioneer Hayao Miyazaki.

The Walt Disney Co. Is trying to change that. The Mouse House is hoping that Miyazaki’s latest, which it is already proclaiming a “masterpiece,” will propel the visionary animator form the art house to the multiplex.

Miyazaki has yet to become a mainstream draw, despite his 2002 film Spirited Away winning an Academy Award. His work is studied in film schools and has inspired such animators as Pixar’s John Lasseter and Pete Docter, but few outside of the major film markets know his work.

“For some reason it isn’t picking up in the red states,” says Tom Sito, an animator and teacher at the USC Film School. “It might be the exotic nature of the subject matter. Miyazaki has said he doesn’t make films for the global market, he makes films for Japan. But personally I find that part of the charm, that it has a cultural integrity to it and it’s not trying to be a Hollywood product.”

While animated films from Pixar, DreamWorks and Disney often feature cuddly creatures and punch lines, Miyazaki films are fantastical, with bizarre and often repulsive characters and complex story lines that are provocative, but rarely laugh-out-loud funny.

But Ponyo is a more accessible film. It has a Little Mermaid -type plot, with a fish girl desiring to become human so she can remain friends with a five-year-old boy she meets on the shore.

“Given that animation is so closely tied to the family audience in this country, this may be the film they can use to really make a general audience aware of how extraordinary Miyazaki’s works are and to bring them the box office presence they warrant,” Solomon says.

Disney, which is distributing the film, went all out this year, staging a panel at Comic-Con that featured Miyazaki himself, who rarely makes appearances outside Japan.

While the G-rated Ponyo stands the best chance of being a hit for Miyazaki, it still faces some stiff challenges.

American audiences have begun to embrace Japanese Anime and Manga titles such as Pokemon. But that market is video-based, says Solomon. No Anime titles have been hits on the big screen.

“It’s a tough hurdle,” says Sito. “Maybe the fact that Americans are used to being spoon fed a basic moral theme. A lot of the big Disney/Pixar films have themes like ‘Don’t judge a book by its cover’ or ‘Love conquers all.’ Miyazaki’s films aren’t like that. They work on several levels.”