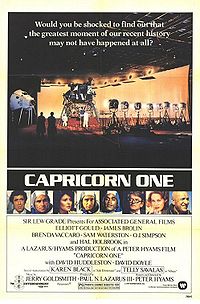 So this morning I happened to be browsing the estimable Turner Classic Movies website, and I noticed that later this month -- July 20th, to be precise -- they're celebrating the 40th anniversary of the moon landing with a bunch of flicks about the exploration of space. A cool idea, I think you'll agree, and I was pleased to learn that along with some obvious choices -- The Right Stuff, Melies' A Trip to the Moon, and (my personal favorite) Ray Harryhausen 's First Men in the Moon -- they were airing the interesting 1960 B-obscurity Twelve to the Moon. In case you haven't seen that one, it features an international team of astronauts (a tad Star Trek -ish, that) who drop in on the lunar surface only to find that there's a super-intelligent alien already there that thinks humanity is immature and dangerous and has to be eliminated. Typical low budget mishegass of the period, obviously, but it's actually quite a bit better than you'd expect, thanks to an interesting script by De Witt Bodeen (a Val Lewton horror film alumnus who also co-wrote Billy Budd )and elegant black-and-white cinematography by the legendary John Alton (who was shooting Elmer Gantry at more or less the same time). It's not on video at the moment, so set your DVRs for 11:30am accordingly. You're welcome.

Oh, and did I mention that the always amusingly monikered silent movie leading man Francis X. Bushman is in there too?

In any case, I was, however, saddened to see that the fine folks at Turner would NOT (understandably, I guess) be running a certain paranoid conspiracy space travel thiller from 1978 as part of the celebration.

I refer, of course, to Peter Hyams ' delightfully silly Capricorn One.

The plot, for those who've missed it up till now:

Three astronauts -- James Brolin , Sam Waterston and (lord help us) O.J. Simpson -- think they've been selected as the crew for NASA's first Mars landing. But just as they're about to take off, government agents wisk them away; turns out that NASA, afraid of a failure that might cost the space program its funding, has sent the Mars-bound vessel up empty while the hapless astronauts sit on a movie soundstage pretending to be in outer space for the benefit of TV news cameras. Unfortunately the real Mars ship crashes on arrival, leaving investigative reporter Elliott Gould , who's smelled a rat all along, in a race against time to prevent the fiendish space agency from offing the hapless astronauts and covering up the conspiracy.

Obviously, this was inspired, if that's the word, by the similar urban myths about the original moon landing (which were believed by the usual crackpot percentage of the American public who now believe that President Obama doesn't have a birth certificate because he's actually from the planet Apokolips or some such taurean fecal matter). In any case, Hyams plays it all quite gratifyingly straight, and if you can get past the obvious retroactive casting problem, it's a fun ride overall. As I said, TCM isn't running it during the Moon Landing celebration, but it's part of their collection and they do show it from time to time; I'll keep you posted.

Bottom line: You can -- and definitely should -- order the DVD here .

Assuming it actually exists, of course. Which is what they WANT you to think...