close
We caught up with Louie Psihoyos and Richard O'Barry, the two men responsible for the acclaimed new documentary. 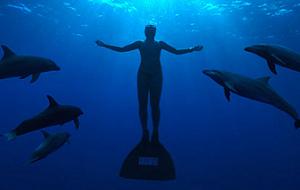 The Cove is already one of the most talked about documentaries of the year, and it started as a conversation between two friends, Louie Psihoyos and Richard O'Barry.

With his background as a wildlife photographer, Psihoyos was certainly qualified to produce this doc about the fate of one small lagoon in Taiji, Japan. O’Barry, the world’s most renowned and vocal sea-life protection advocate, exposed Psihoyos to the largest regular dolphin harvest and slaughter on the planet. Horrified by the tragedy fisherman and dolphinarium recruiters regularly inflict upon the dolphin population, Psihoyos wrangled together a crew of covert ops—adrenaline junkies and undersea divers who were as dedicated to exposing the dolphin slaughter in this tiny lagoon, as they were determined to subvert the authorities who allow the tragedy to continue. O’Barry, now infamous among the Japanese authorities, was once beloved in Taiji—a city known for its whale and dolphin festivals. Today, O’Barry is dogged by police and authorities anywhere he goes in Taiji and if he’d had a literal hand in the cloak-and-dagger expedition to expose the slaughters occurring in this cove (a cove just the size of a football field), the crew never would have seen all it did. B OXOFFICE sat down with the two men to discuss their riveting new film.

This is a doc that looks like a spy film. It’s a spy film with the heart of a documentary. Meanwhile, the film’s subject, the dolphin trade, purports to be education while it’s really exploitation—

Richard O'Barry: The best thing that can happen for this issue is for it to be exposed on a massive scale so that people can get involved. We can force the government to shut it down. There are a lot of other (Coves) going on. There are the Solomon Islands and the Pharaoh’s Islands—the dolphin slaughters are going on in other parts of the world, but if we can’t fix this lagoon we shouldn’t go further. We need to focus on this until it shuts down. When it shuts down, and it will, it’ll be for a reason. So you take that reason and project it onto the other places. In the Pharoah’s Islands they’re killing dolphins for their meat. That one could shut down for mercury contamination.

I think there’s a beauty to the sentence. It implies no perspective. Mr. O’Barry, you’re a microcosm of the American Dream. You got to specialize in a field, made it work and then had to dismantle it.

LP: Now, Rick doesn’t see his own life as a redemption story. But I do. I think the story mimics what society needs to do. There’s a wonderful parallel between what’s going on in the environmental movement and Rick’s life. You go on living a comfortable life and all the sudden you have to change something. We have lights, energy, we foul our own nest and then we have to turn a corner. Rick, to me, is the American Dream and we all have to become him. Yeah. (To O’Barry) You’re just a tool, Rick.

But it’s not just about the career trajectory of one successful man. The film makes a very clear cause and effect case for the whole story of your life. The industrial revolution plays a part in your story, too. The Industrial Revolution and the collection of Porsches you once had.

RO: I had a new one every year for like 5 years. I had a Jaguar … today I have a bicycle … and a car.
LP: He drives his daughter to school on his bicycle.
RO: This is the largest slaughter of dolphins on the planet. And where is everyone? Here, you have a multi-billion dollar dolphin display industry. They make two billion dollars of profit in America alone. There are 50 dolphinariums in Japan and they’ll tell you the reason we’re displaying dolphins is to educate the public. If you go to Marine World in Vallejo they’ll tell us “We want to sensitize the public so they know to protect.” But when is the dolphin display industry going to get started? They make money off of dolphins—billions with a “B.” I’m really talking about the larger environmental community and we need more people on the issue. We’re talking about a body of water as big as a football field. If we can’t fix that, how can we hope to touch bigger issues?

The Cove opens in New York and Los Angeles on July 31.