close
With Funny People, Judd Apatow and Adam Sandler are trying to bring moviegoers into an exclusive world. 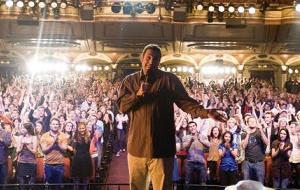 With two huge comedy hits as a writer/director under his belt, Judd Apatow has a huge head start for his third film, Funny People, which opens Friday.

Fans know Apatow for his 40-year-old virgin and the lovable stoner who suddenly becomes a father in Knocked Up.

But Apatow's latest film takes a number of risks, not least of which is its setting—the small world of Hollywood comedy clubs. Will mainstream audiences relate to a film that is so steeped in backstage humor?

Absolutely, says a film veteran who believes that Apatow and his star, Adam Sandler, have created a film that will not only appeal to their built-in fan base, but is likely to attract a new audience as well.

“This movie is not just about the inner workings, but about the relationships,” says Tom Sherak, an associate professor at the UCLA film school and a former film executive with Twentieth Century Fox and Revolution Studios. “We’re going to see a movie about life, about friendship. If it’s a good movie, it’s going to work.”

Sherak remembers when people said movies set in boxing rings and baseball diamonds were too confined, too specific, too inside. Then along came Rocky and The Natural. There’s no reason to believe that a film set inside a comedy club can’t work, too.

“It doesn’t matter anymore,” adds Sherak. “There is something they are selling that looks good and smart, even though it might be about inner workings.”

Apatow acknowledges the other challenge his film faces. While Funny People is billed as a comedy, the story is about a famous comic (Sandler) who is told he is dying. Then, after making the kind of changes someone facing a death sentence would make, is cured.

“I’m trying to make a very serious movie that is twice as funny as my other movies,” Apatow wrote on the film’s website. “Wish me luck!”

For sure, movies that were filled with inside references and satire, while loved in Los Angeles and New York, have had a hard time finding a wider audience. While The Player, the Robert Altman film starring Tim Robbins, is still a favorite of critics and entertainment executives, it wasn’t exactly a huge box office hit.

Neither was The TV Set, a film about a hapless television writer played by David Duchovny. And State and Main, the brilliant David Mamet farce that many industry insiders can quote by heart (“So, that happened”), didn’t find mainstream success.

But clearly, some glimpses inside Hollywood’s back rooms can work. Just look at the HBO series Entourage, which focuses on the very exclusive world of actors, talent agents, studio executives and publicists.

“That’s as ‘In’ as you can get and it’s very successful,” Sherak says of the show, which is now in its sixth season. “People love it. It’s put together well, it’s written well and it’s acted well.”

Sherak says that Funny People has been tracking well, which means the film has built-in appeal for younger audiences because it stars Seth Rogan and Jonah Hill, who together made the wildly popular Superbad. The love triangle between Sandler, Leslie Mann and Eric Bana will appeal to females. And Sandler, despite his youthful sense of humor, holds an enormous appeal for older males (over 25) who have grown up with his films.

“He’s sort of the adult in this movie,” Sherak laughs.