close
The recent success of Transformers: Revenge of the Fallen has given movie business stocks a solid boost. 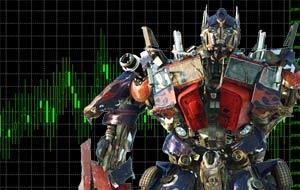 The latest summer smash is transforming more than just cars into audience-pleasing robots.

Transformers: Revenge of the Fallen is changing the stock portfolios of some of the country’s biggest theater chains.

The stocks for Carmike, Regal and Cinemark, three of the biggest publicly traded domestic theater chains, shot up 10 percent, 7 percent and 6 percent, respectively, since the Transformers sequel opened June 24. The theatrical advertising firm National CineMedia also got a boost, with its stocks jumping 9 percent.

Isn’t there a recession going on?

What makes the exhibition industry so appealing to investors in the midst of a highly unstable market?

Consumers want to find ways to satisfy their entertainment needs close to home and at a reasonable price, Wold says. And what better way to do so than via movies, particularly light-hearted comedies ( Paul Blart: Mall Cop ) and action adventures ( Star Trek, Revenge of the Fallen )?

Booming ticket sales, and higher concession sales which provide a better profit margin, made exhibitor stocks a relatively safer bet in a down economy, he says.

Ron Rizzuto, professor of finance at the University of Denver’s Daniels College of Business, says the cyclical nature of movie going could also play a part.

That, combined with the depth of the current recession, has “people hunkered down a bit more than in the past,” Rizzuto says.

In trying times, the demand for cheap entertainment alternatives, and even a guilty pleasure like chocolate, tends to rise, he says.

“You can indulge yourself a little bit,” he says, all the while being more selective about bigger ticket leisure items like vacations and concerts.

Transformers 2 may be goosing the box office at the moment, but the summer movies prior to the sequel’s arrival also delivered.

“Look at the box office data before Transformers. The numbers were up, not huge, but noticeably up from prior years,” says Rizzuto.

That means their stock prices will likely stay solid or even grow a bit more.

Plus, Wold says 2009 movie goers don’t mind paying extra to see their favorite characters either in 3D or IMAX venues. If the big theater chains can ramp up their 3D screen installations, stock prices could benefit.

“You should see another wave of attendance and box office growth beyond the current
wave we're in,” Wold says.

Of course, if a parade of cinematic stinkers visits theaters between now and Labor Day, the stock situation could change for the worse.

“Historically, the biggest driving factor getting consumers into the movies has been the quality of movies. If there is a wave of unpopular films, then we would definitely see box office numbers trail off quickly,” Wold says.