close
Harry Potter and the Half-Blood Prince and Ice Age: Dawn of the Dinosaurs are doing very well abroad. 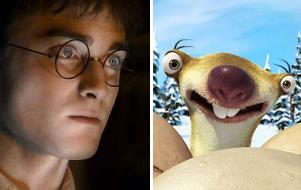 Factoring in box office grosses from 52 reported territories across the globe from last weekend along with the domestic grosses up until Tuesday, Rentrak is reporting that Harry Potter and the Half-Blood Prince has reached a staggering worldwide gross of $587.8 million. The sixth installment in the popular wizard series added $106.6 million in worldwide ticket sales during its second weekend of release.

20th Century Fox can happily brag that Ice Age: Dawn of the Dinosaurs has already reached the $600 million worldwide plateau. The third installment in the animated series has grossed $632 million across the globe after only four weeks of release. Ice Age 3 added $44.9 million in worldwide grosses thanks to 56 international territories this past weekend.

Transformers: Revenge of the Fallen, currently playing in 52 international territories, also boasts an impressive worldwide haul after six weeks of release. Michael Bay's sequel has reached $695.6 million across the globe

Depsite opening at thousands of locations domestically last weekend, G-Force and The Ugly Truth were only unveiled at three overseas territories each. Both films are off to such strong starts domestically that they may not need overseas success in order to turn a profit for Disney and Sony, respectively. G-Force has grossed $41 million worldwide, while Truth has reached $35 million.

Good news continues to pile up for The Hangover, which has reached an astonishing worldwide haul of $346.8 million and is playing in 33 international territories. While director Todd Phillips has announced that his next project is going to be Due Date with Robert Downey Jr. and Hangover 's Zack Galifianakis, The Hangover 2 is still set for a 2011 release.

A pair of Universal releases are adding some solid international grosses to their underwhelming domestic hauls. Brüno, which has been falling fast domestically after a $30 million opening weekend, has reached a worldwide cume of $117 million thanks to 29 international territories. That's pretty impressive for a film that cost a reported $42million to produce. Meanwhile, Public Enemies, which is playing in 32 international territories, has reached a worldwide haul of $125.7 million, which it will need to keep padding thanks to a production budget reported to be more than $100 million. It's no surprise that Enemies is playing well abroad, because director Michael Mann's past films such as Miami Vice and Ali usually do great business internationally even when they disappoint domestically.

Check back next Wednesday for more worldwide numbers.