close
Fans of the wildly popular Twilight franchise will soon be able to mingle at conventions across the country. 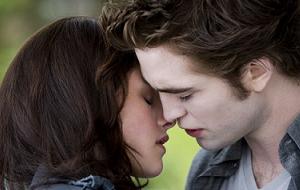 In the “It had to happen sooner or later,” category, fans of the Twilight books and movies will get their chance to vamp it up in person when three years of official Twilight conventions kicks off next week in New Jersey.

Whether you’ve been bit by the Twilight bug or not, there is no doubt that the stories about vampires and werewolves in the remote village of Forks have inspired as loyal a group of fans as those who dress as Harry Potter for Halloween or who list Klingon among languages they speak fluently.

The first film was a huge hit and anticipation is building for New Moon, which comes out in November. The romantic tale of the vampire Edward Cullen and his human love Bella Swan, fraught with danger and violence as well as passion, has become an obsession for fans, who have booked Twilight Alaskan cruises and even ordered yellow contact lenses off Web sites such as Vampfangs.com.

Summit Entertainment, the producer of the Twilight film series, has partnered with Creation Entertainment to put on the three-day conventions, which will feature appearances by cast members. Creation is the company behind the biggest Star Trek conventions and has also hosted fan gatherings for followers of such shows as Farscape, Battlestar Gallactica and even Gossip Girl.

“Everyone is a geek about something,” says Denise Gideon, who has attended such fan gatherings as Comic-Con, DragonCon, and who works for the Southern Gothic Productions Podcast. “You find something that inspires you and you want to follow it and support it.”

“You have people painting their bodies in college towns to cheer for their team. It’s no different,” she said.

The Twilight conventions will travel to places like Boston, Los Angeles, Nashville, Phoenix, Chicago and Toronto. So far, the two top stars, Kristen Stewart and Robert Pattinson, are not scheduled to appear. But that is not likely to stop the millions of fans who will travel dozens, if not hundreds of miles, to shake hands and get their pictures taken with other stars including Ashley Greene, who plays Alice Cullen.

“Fans will go for just the chance to see new merchandise and meet other people who are as preoccupied as they are,” says 26-year-old Fuchsia McInerney, chief executive officer of Pearse Street Inc., a new media consulting firm.

Twilight has the potential to eventually eclipse Star Trek, Star Wars and other sci-fi properties when it comes to fan loyalty, McInerney says. While women make up the vast majority, fans also range from pre-teens to their parents–the so-called “TwiMoms.”

“When you think of Trekkies or Harry Potter fans, they’re more of a nerdy, introverted group who come together over this odd series,” she said. “ Twilight fans are more mainstream.”

And those huge crowds sure to speed their way to a Twilight convention or who gather on social networking sites are building the buzz for the next film into a deafening roar.

“All we’re doing is funneling traffic and interest to their merchandise and building anticipation for the movie,” says McInerney.

Fuchsia and her sister-in-law Amy McInerney are both big fans of the Twilight books and each say they would consider attending a fan convention if it were nearby.

“My only reservation is the 13-year-old girls,” Fuchsia says. “Girls can be a bit much with the screaming and the fainting.”