close
The up-and-coming actress discusses the unconventional new film she made with Michael Cera. 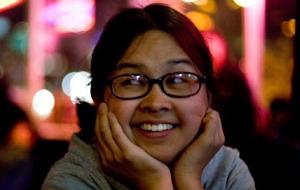 America met Charlyne Yi when she played a stoner geek dream girl in Judd Apatow's Knocked Up. But the Los Angeles native was already one of the local stars of comedy—a deadpan, hyperactive kid who acted 12 and claimed to be 33. Between band practices with her five rock groups—Chandelier Teeth, Glass Beef, Old Lumps, Music Scientist and Helen Hunt and the Twisters—Yi and director Nicholas Jasenovic decided to make a documentary on love, which doubled back to bite her when he suggested she star in it herself. Then it doubled back again on the audience when people realized that the way she presented herself—as an awkward cynic slowly falling in love with Michael Cera—might be mostly a lie. Or mostly true. The press behind that documentary, Paper Heart, has focused breathlessly on a romance which has been denied, affirmed, claimed done and declared back on with as much chaos as if the two were tabloid stars with six children. Yi has mastered hiding in plain sight. Here she talks to B OXOFFICE about having her love life up for debate, whether comics can find romantic bliss, and how to hold on to Channing Tatum when he's all greased up and dancing like Patrick Swayze.

I remember the first time I saw you years ago in the basement of a Ramada. You were sword-fighting.

Oh, really? That was probably a bad show. An idea I had last minute or something. Oh boy. Oh god.

It was exciting. But tell me about lying up about your age in a town where everybody lies down. I was one of those people who just accepted that you were in your thirties.

I'm actually 23. I made a lie about my age and it caught on like rapidfire. After a show, someone was talking to me in a baby voice like, "You were soooo cute up there! Awww, whatcha doing?!" And I said, "Oh, actually, I'm 33." Instantly, they just became, "Oh. Um," and started treating me completely different. So I thought lying about my age was a funny thing because I realized that people treat you really differently. If someone said, "Wow, you've accomplished a lot and you're what, in your mid-twenties?" and I told them I was 33, somehow it takes away from all the credit that you've done. It seems like they're less impressed with what you've accomplished. I thought that was interesting because I think that people shouldn't be looked at that way about age. If what you've accomplished is good, then it's good. It's just a weird experiment—I don't think Overture likes it. There's articles saying I'm a cougar.

It's funny that the truth is coming out now when you've made a documentary about yourself that in some ways leaves people knowing you even less.

It's very confusing for them and that's good.

What's it like to be constantly grilled about how true your life is, especially your relationship with Michael Cera?

It gets boring. You can tell when someone's about to ask you about it. They're like, "I hate to ask this, but..." If you really hate to ask it, you wouldn't ask it, you know? It doesn't really matter because it's not true about me and Michael, so no biggie.

Have you ever skimmed any romantic advice book like The Rules ?

No, I've never read any romantic advice books. Should I? Are you giving me a hint?

Yeah, this is actually Dr. Laura calling. This isn't an interview—it's an intervention.

That'll be the day! I've jokingly asked my friends how to flirt, but I wasn't really serious. I don't want to learn how. I don't want the power of that weapon against men. It'll make them weak.

Since you're also a musician, what's the best makeout song?

I don't think I really have a favorite makeout song. If there's music that happens to be playing, I'm like, "All right." There's been times when I'm like, "Oh my god, turn that off!" I think it was the song "Sweet Dreams." I hate that song so much. That, "Sweet dreams are made of these"—it's so creepy! It gives me bad thoughts.

That drone. Unless you're thinking of the Marilyn Manson cover, which is also creepy. If somebody wanted to get to Charlyne Yi's heart and stood outside your window with a boombox, is there a song that would work on you?

Maybe "The Greatest Love of All."

In your scenes, how did it work when you had Nick Jasenovec, the real director, and Jake Johnson in front of the camera playing Nick the fake director? How did you know who to talk to but make it seem natural?

Your true love stories that you collected and turned in to puppetry were amazing. After hearing them, do you think that falling in love is easy or hard—something that really has to be thought about to work?

It's different for everyone. I don't think anyone's wrong if they fall in love instantly. For some people, it works out. For other people, it takes time to grow and realize it. Some had been friends for ten years. Not that I'm a professional in love, but from talking to people you hear stories about people being friends for 15 years and they never really thought about the other person that way. Then suddenly, they're like, "This person is my best friend and I'm totally in love with them!" Sometimes, you think about it; sometimes it just happens. I have no idea.

Seth Rogen popped up as one of the people who gave you love advice. I saw Funny People a few days ago and it has this undercurrent about how hard it is for comics to find love—is it harder for comics than civilians?

I don't think so. There are plenty of comedians I know who have love. They've married or are dating someone. I don't think the occupation defines whether they're capable of love. That's just my opinion—I have no facts.

You did a great job imitating love in your Dirty Dancing video with Channing Tatum.

That was really fun. I've been a fan of Channing since She's the Man and also A Guide to Recognizing Your Saints. I wanted to see if he'd do a bit with me and I was writing him over email. He was like, "I'd totally do it -- the only thing is I'm not funny." I was like, "I'm sure you're funny." And I got cast to do a spoof of Dirty Dancing and I thought, oh my god, Channing knows how to dance! And I asked him to do it and then I got worried. What if he isn't funny? What if he was telling the truth? But when I met him, I knew instantly he was really funny and he's the nicest guy ever. Super easy to get along with. When we practiced at my house, he was like, "We're doing the lifts." Lifts? What are you talking about? He made me do the lifts in my apartment and it was really, really scary. And when we did the lifts on the set, he was all greased up. I'd touch him and get really grossed out. It was slippery. I was like, 'Channing, please don't drop me—please don't drop me!" He didn't drop me, thank god. He's very strong.