close
We sat down with Malcolm McDowell to discuss his role in Rob Zombie's latest Halloween film. 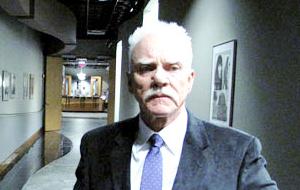 Blame it on the accent or the confident and bright blue eyes, but British actor Malcolm McDowell has played more doctors of destruction than anyone in Hollywood. Even among his killers, villains and loons, Dr. Samuel Loomis of Halloween stands apart. Donald Pleasence originated the role for John Carpenter as a smart, but hapless harbinger of doom forever fighting Michael Myers for his life. Pleasence played Loomis for four more sequels, and a fifth— Halloween: H20 —had to fill the role with Tom Kane after Pleasence's death. Rob Zombie's 2007 psychoanalytical remake re-imagined the shrink as a self-promoter with boundary issues who once called Michael his “best friend.” To the Haddenfield, Illinois survivors, this new Loomis is a creep on par with his favorite patient, and the way McDowell savors his selfishness is irresistible. Zombie's Halloween II, in theaters August 28, picks up with Dr. Loomis on a book tour for his new pulp tell-all where he can't resist the extra publicity of swinging through Haddenfield on the anniversary of the attacks. McDowell talks to B OXOFFICE about his approach to playing right wankers and why he's never drawn to classic heroes.


As somebody who's specialized in playing chilling characters, what's the last movie that's scared you?

I'm not really scared in the movies because unfortunately I know how they're made, how they put it all together. But the one movie that made me jump out of my skin was the one with Alan Arkin and Audrey Hepburn, where she was blind— Wait Until Dark. There's a moment in it when it's completely black and he opens the refrigerator door. She's this poor, defenseless waif and you literally jump out of your skin.

It's not even about gore.

What is it like to see yourself made gory with special effects?

I haven't seen Halloween II yet, so it will be interesting. I know it's pretty bloody. I was once beheaded in a film and then they stitched my head back onto another body.

Will it scare your kids to see that?

They'll be freaked out. They're freaked out if I have to kiss another woman. My son goes, 'Do you really like her, dad, more than mom?' No, it's just my job. Well, he goes [sardonically] 'Nice job.'

Have you ever met any fans that are as unhealthily attached to your characters as the ones Dr. Loomis comes across as he promotes his tabloid book about Michael Myers?

Unfortunately, yes. Sometimes it's hard for people to differentiate between me and the characters I play. There's a huge difference—of course. In a way, it's a great compliment, but you think: Wow. If somebody has to go with me on this journey and get lost so far in it, it's a little weird, because I don't get that lost myself.

I do want to talk about how this is a more unsympathetic Dr. Loomis than in the past, but in those moments where people call him evil on the talk show and in the bookstore, I couldn't help wondering if there was an intersection of empathy. Some of your films, especially A Clockwork Orange, have been blamed for causing violence when it isn't necessarily fair.

Films only mirror life. A film about a revolution never starts a revolution. We just mirror what's going on. Maybe it was subliminal, the empathy. I don't know. I just looked as it as this fun thing to have this obnoxious, egomaniac doctor who's written this pathetic book and is now professing to be this authority. If you write a book, you're an authority. That's it. You are the expert. Which is such nonsense really, but that's just the way we are. If somebody sits down and actually writes a book about it, then they are the expert. Loomis is a real operator. But I'm very fond of him because he's such a flawed character, and I love flawed characters.

That's one of the things I like about your filmography because some other actors are afraid to get too involved with flawed characters—they don't want to be unlikeable.

Well, then don't be an actor. That's my advice. I think you have to make that decision early on in your career that not everybody's going to like you, so just stay true to the parts you do. It is a big hangup for some actors. I've never had a problem with that, thank god.

Are there any heroes you wish you could have played?

Heroes? Oh god. None that jump to mind. No, because I think when you actually dissect a character—say for instance, John Lennon—he wrote such brilliant music, but he was probably a real asshole. The thing is, you'd have to play him as an asshole. And actually that's interesting because he wrote such glorious music. But he could only do that because he was this edgy guy with this angst.

And then you see documentaries like The U.S. vs. John Lennon which just made him into this messiah figure.

It's dumb. I was at this party in Liverpool in '62 or '63, and he slapped this girl so hard. Literally: He was a batterer. And he actually beat her up and had to be restrained.

Did you see Inglourious Basterds yet?

No, but I'm dying to see it. I love Quentin—I think he's a wonderful talent.

It's interesting because it touches on some of the things we're talking about. It's inverted; the most heroic character in it is a German officer who tries to save his men and gets beaten to death with a baseball bat.

That's so cool. He's so interesting—he's got such original ideas. I'll go see it. A friend of mine saw it and said it was absolutely great, don't believe the critics. Some critics don't like it? Who cares. Where do you live?

I do—you live up north, yes? Ojai? Did you get any of the traffic to Neverland when Michael Jackson died?

I wasn't here—I was working—but that was staggering, wasn't it? And now he's gone.

Are there any characters that you wouldn't play because they're just such a nasty piece of work?

No. The one that was the worst was this Evilenko character, Andrej Romanovic Evilenko. It's one of this films I like that nobody has seen—I think it's amazing. I had to play this serial killer who was a pedophile and a cannibal. It was so depressing to me to have to get on a flight and fly to the Ukraine to shoot this movie and play this part. I was really depressed about it. I got there, couldn't get out of it—it was a friend of mine directing and I really love him. It was awful. And then I discovered a way to do it: to work from the outside-in, rather than the inside-out. It became one of the best things I've done.

You work on the externals—the walk, the look—and that gives you the inside of the character, rather than finding the emotion first and having it come out.

Does it make it easier to leave that character behind?

Exactly. You just take it off like a raincoat. It took me a long time to figure that out because I don't work that way. That's not my usual method of working. I usually work in-to-out; I find the core of it and then see what happens. But here, I couldn't do that because I just hated who this man was. But really, he was just a sick bastard. He was a schizophrenic.

I'm doing a play next spring. It's a one-man show in LA at the Kirk Douglas about a wonderful critic in England called Ken Tynan. His profiles are very famous in the New Yorker. He kept this diary—it's fascinating. It's brilliantly written, and I'm going to do the diary. Of course, he had this secret sexual life of spanking, which is to me hilarious and so English. Only the English would get off on that! It's so weird, you know. But he's this gent, very elegant—piss-elegant—and he's going off on the subway to the end of the line to some blue-rent, middle-aged lady who's just paddling him. And he's getting off on that—it's hilarious.

It sounds like the byproduct of all those English schoolboy nightmares.

Exactly, that kind of thing. So I'm doing that, I've got a lot of projects in the air. I've got a Tuscan comedy with the same man who directed Evilenko. There's a suspense thriller that I'm supposed to do in Tangiers or somewhere. And then this time next year, I'm going to shoot a movie called When the Garden Gnomes Bleed, which is by the same writer who wrote my first movie. I'm going to do it for him. It's a good reason to do it. And it's a very good script.

David Sherwin, yes. An old, old friend of mine. The script's been around for years, and we've got a new director and a rewrite with David and it's so much better. I really enjoyed it, so I said I'd do it.

Have you listened to Rob Zombie's music?

I love it. It's great. He's really got something. This movie is a sequel and I know it's hard to get it attention, but he's a director with his own ideas.

I liked that the girls in the movie looked like they'd be fans of his music.

That's probably why he cast them.

If Halloween II goes well, do you think you'll sign on for the duration like Donald Pleasence?

To be honest, I think the chances are almost zero. [Laughs] Almost. But you never say never. It's unlikely. But, who knows?