close
We caught up with the legendary character actor to discuss his new role as a zombie hunter. 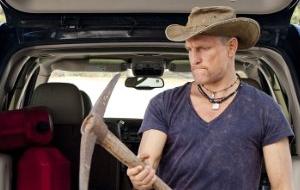 In the last twelve months, Woody Harrelson has played a blind meat salesman, a surfer, a vigilante, a soldier, a basketball player and a yogurt billionaire. His latest role as zombie hunter extraordinaire Tallahassee fits perfectly into his eclectic mix—he's always one weird man on a mission, achieving greatness even if no one else does—or can— notice. Luckily for Harrelson, Hollywood sure spots his talents as he pops up time and again in the year's best (and most diverse) movies: No Country for Old Men, Prairie Home Companion, A Scanner Darkly, Semi-Pro and Seven Pounds —all wildly different and planted in the zeitgeist, much like the actor himself. Here, Harrelson tells B OXOFFICE his strategy for picking great films, the likelihood he'll survive an undead apocalypse and how easy it is to mistake a paparazzo for a zombie, his defense after busting one in the nose.


Tell me about Tallahassee—he's a zombie-killing bad ass, but his character is more than that.

At least superficially, he is this zombie-killing bad ass cowboy. But he's had some tragedy in his life, which always makes a character more interesting. Or a person, for that matter. He's alone, and he's decided to be alone. It's the safest way to be -- you can only trust and count on yourself. But then he meets Jesse Eisenberg's character, Columbus, and they really become this great pair of zombie-killers. He's a fun character to play.

And he's obsessed with Twinkies? Is that because they and cockroaches are the only things that can survive an apocalypse?

But there's a finite amount of Twinkies. And he's got to find the last of them—it's a search that continues though the course of the movie.

Tallahassee gives this beautiful speech about how you have to find the joy in little things to make the most out of life.

Yeah. It's one of the things Tallahassee says after he kills a zombie. You gotta enjoy the little things.

He does have an interesting philosophy. I guess I could say, even though it's meant to be a very funny movie, there is a philosophy to it which I love. I feel like Ruben [Fleischer, director] does a great job of bringing that out along with the bedlam and carnage.

I heard that Ruben allowed—or invited—20 minutes of improv before each scene?

He really liked the improv. We did quite a bit of improvising. Digital is cheaper than film—we would just run with it.

Everyone kept talking about how actually hilarious you are—are you tempted to write a screenplay yourself?

That's funny— I'm actually three-quarters of the way through three different screenplays. I'm psyched about all of them. Man, you really need to be hungry to be a writer. You need incentives, but I think I'm going to finish them soon.

Want to give me a hint about what one of them's about?

One of the things is actually a play that I've been working on with one of my oldest friends—literally, he's one of my oldest friends—Frankie Hyman. He's a buddy of mine I've had since I worked in construction years ago. He had such an impact on me that I wanted to write a play about him. But when I tried to find him, I couldn't find him. We even hired a private detective and couldn't find him. Then I went on Leno and asked where Frankie Hyman was and told people to call and his brother was watching. I got a call the next day and we reunited. And then Frankie had quite a serious drug issue, so we put him in rehab. Now, he's been clean and sober for a while and we're writing together the same story. That's one I'm really excited about. They're all comedies, all three of them. One of them is based on Peter Farrelly's book, The Comedy Writer. Or it is. It is the book, translated in film.

I look forward to the day you're ready to show them to everybody.

You're also in 2012 later this year. What do you think the audience interest is in seeing movies about the end of the world?

I don't know? There's been a feeling for quite a while—maybe part of our Christian heritage—that there's going to be an apocalypse. In Revelations, they talk about it. There is an apocalyptic vision or concept that a lot of people have. It's kind of a fearful attitude, honestly, but I think a lot of people believe that it might come to that. I do think that ecologically, it's looking pretty dicey.

How would you survive a zombie attack? Is there anything you learned here as a trick?

It's nice to have a good arsenal. Plenty of things that you can use to defend yourself. Hmm. Did I really learn anything over the course of this? I'm not sure. Probably if it came down to it, I'd be one of the many scared folks quivering in the basement.

This is your first actual action movie, which seems surprising?

Yeah—I did get offered some other stuff, but I never really saw myself doing action movies. They're hard for me because when they're shot, they're usually shot in these little pieces. Little snippets. I was hanging out recently with Daniel Craig and I was like, "How do you keep that intensity up, take after take after take?" You know how intense he is, or Harrison Ford, who's great at it. They keep a continuity in their mind for the character and the intensity level that, to me, is very, very difficult. You're frequently shooting out of continuity and in little shorts bursts of a few seconds. I've learned—I'm not really sure I'm that capable of it—but it was good to play the part. I don't look at it so much as an action movie, although I guess it is. I like all the characters and I like the comedy.

Did you and Abigail Breslin bond on set over your Oscar nominations?

We didn't really talk much about that, although she's the youngest female ever nominated. She was like 9 or 10. She's phenomenal. All these guys—such a pleasure. Her and Emma Stone and Jesse Eisenberg. It really gelled into a nice family experience, which I always think is the best way to go if you're going to do a movie. The only way to go. If it doesn't become familial, it generally translates.

Tell me a little about working with Jesse—I loved him in The Hunting Party and Adventureland.

In fact, I went to see Adventureland while we were shooting the movie and I was knocked out. He has that same thing that whats-his-name, Michael Cera has. Nervous and neurotic, but translating that into great humor. Being kind of brilliant and also constantly on edge. I don't know how he does it, whatever he does, but to me it's riveting. Just improvising together was a lot of fun, I gotta say.

How do you pick your roles? Your resume is so diverse.

It's a question of story and the heart within the story. Here's, it's a comedy and fun, but there's a lot of heart so I was really attracted to it.

I'm really excited about this movie we did called The Messenger with Ben Foster and Samantha Morton. It's one of the movies I'm most proud of— it's a really great movie. It's also a first time director. Oren Moverman directed it. And that's coming out as well in the end of October. It's going to be a busy fall.

Ben Foster is another guy I've been keeping my eye on—he's amazing.

He's phenomenal. I love him, I gotta say. In everything he does, he's one of those consummate great actors. He reminds me in some ways of a young Sean Penn. He's obviously very distinctive, but he definitely has that intensity.

Could you tell me about mistaking a TMZ paparazzo for a zombie?