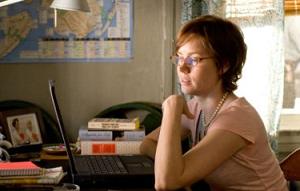 Nora Ephron’s new film Julie & Julia,” starring Meryl Streep and Amy Adams, strives to convey what it feels like to replicate an array of award-winning recipes.

Audiences will likely rush home and start cooking after seeing the film, based on two true stories.

The dicier part of the movie involves blogging—Adams’ character cranks up a cooking blog to document her attempt to make every meal in Julia Child’s most famous cookbook.

Blogging isn’t the most visually arresting activity one can put on film, and the blog in question began at a time when bloggers typically worked with bare-bones formats.

Who wants to read text scrolling across the screen?

Movies have struggled to incorporate the Internet, and the intricacies of computers in general, into stories for years.

Think back to the 1998 rom-com You’ve Got Mail, in which Tom Hanks and Meg Ryan furiously flirt over AOL’s instant messaging system. The plot device worked there, but it asked the actors to make some of their keystrokes grandiose to spark up the visuals.

Other films struggle to utilize computer technology as well.

The 2007 sequel Live Free or Die Hard dealt with computer whizzes and hackers, but the film only perked up when the bedraggled John McClane (Bruce Willis) took center stage.

And the 2006 actioner Firewall, featuring Harrison Ford as an tech security guru, stands as one of the least thrilling films of the actor’s career.

Chris Abraham, president and COO of the social media marketing firm Abraham Harrison in D.C., points to an even earlier film to showcase the struggles directors have in visualizing the world of computers.

The 1983 film War Games actively relied on computers to tell the story of a teen trying to prevent thermonuclear war.

“They didn’t understand how transparent the Internet was. Every time they tried to convey something, they’d voice over their own typing,“ Abraham says.

By comparison, the using of blogging as a plot point makes the director’s job a little easier.

“Many blogs are a ship’s log of what’s happening it the real world,” Abraham says. “It’s easier to convey a blogger’s story than a writer’s story.”

Abraham, who also blogs, says the very act of blogging can be a personal affair. Many bloggers work alone, late at night or perhaps in a café, which makes capturing them at the keyboard even tougher for a film director.

In a way, it’s not too different than trying to capture a traditional writer’s work on screen. It typically involves a hunched over figure pounding away at a typewriter, occasionally crumpling up a sheet of paper and hurling it toward the nearest garbage can.

Had Julie & Julia been set in 2009, the blog home page itself might have supplied some effective visuals.

Today’s “foodie” blogs are high tech and feature beautiful photographs utilizing narrow depths of field to make the meals pop off the screen, he says.