close
The Mad Men star obviously is looking for a successful film career. Will he pull it off? 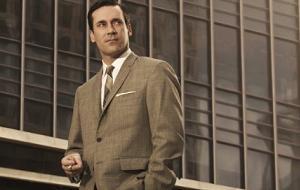 But can it help him make the leap to film work?

Hamm is the latest in a long line of TV actors who dream of success on the silver screen. The square-jawed thesp had a supporting role in last fall's The Day the Earth Stood Still, and he was recently cast in Sucker Punch from director Zack Snyder ( 300, Watchmen ).

But for every Bruce Willis or Will Smith there’s a David Duchovny or Ray Romano, actors whose television fame has a hard time translating into a cinema career.

And while some actors dart back and forth between the two mediums, many clearly see movie stardom as the ultimate goal.

“He played a surprisingly well-scrubbed, good looking cowboy on TV in Rawhide with low-key, easy charm and a strong appeal to teenage girls,” Toth says.

But Eastwood shook things up when he moved on to film work. Suddenly, his likable presence took a back seat to someone with an “easy trigger finger.”

“Everything from his gun to his steely stare was dangerous and oversized,” he says.

Consider Tom Selleck, a major TV star thanks to Magnum, P.I. who also had looks, charm and an agreeable personality.

“Those qualities all work really great on TV,” he says. “But nobody pays money to see their friendly next-door-neighbor on the big screen.”

Television is an intimate medium meant for quieter characters, he says. Movie stars should be larger than life.

“Most people went to Bruce Almighty because of Jim Carrey, and everybody went to Marley & Me because of the dog,” he says.

Jenelle Riley, National Film and Television Editor for Back Stage Magazine, says George Clooney stands as the prime example of a TV actor making the switch without a hitch– Batman & Robin notwithstanding.

“After so many failed series, he knew to play it smart in picking his roles. And, most importantly, he didn't pull a David Caruso and leave behind the series that put him on the map,” she says.

“I think Jon Hamm will do well because he's not leaving Mad Men to pursue a film career,” she says.

Not every TV actor today wants to leave broadcast or cable landscape.

“Just about any actor will tell you some of the best writing is on TV,” she says.

Toth is withholding judgment on whether Hamm will follow in Eastwood’s footsteps, or those left by Selleck.

“Jon Hamm may have the striking looks and acting skills to be a movie star. But does he have the ability to go larger, or is he the nice looking guy next door?,” he asks.