close
Audiences around the country witnessed a presentation of scenes from James Cameron's film. 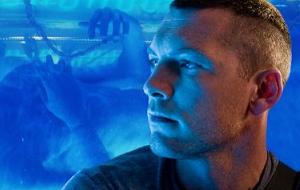 Director James Cameron has made audiences wait 12 years to see his cinematic follow up to Titanic.

On Friday, he personally introduced the first batch of clips for his upcoming sci-fi adventure Avatar.

The Oscar-winning director reassured audiences all the clips, which totaled roughly 16 minutes in length, were culled from the film’s first half. If audiences were hunting for spoilers, they were out of luck.

The clips themselves introduced us to Jake, a partially paralyzed former Marine played by Terminator: Salvation co-star Sam Worthington. Jake undergoes a medical procedure during one clip, and later we learn of a process which lets him walk again.

The catch? He’ll walk as an avatar—a brand new version of himself.

The scenes touch on the alien race featured in the film, humanoids with carbon fiber wrapped around their bones which makes them sturdier—and tougher to kill, we‘re told.

We also see Jake’s avatar battling a series of intergalactic beasties, creatures which impressively pop off the screen courtesy of the sturdy 3D technology. The 3D elements appeared more cohesive than recent 3D efforts, especially during a chase scene between Jake’s avatar and an unrelenting beastie out for his blood.

The monsters sport far more colors than the typically ashen prehistoric monsters audiences are used to seeing. But some may be less awed by Jake’s avatar. Cameron’s past films may have raised the bar permanently on CGI trickery, but here the avatar appears more animated than truly life like.

Cameron remains a visual storyteller, but his penchant for clunky dialogue can’t be fixed, apparently, by any CGI magic. Why insert early 21st century slang, like the kind Worthington’s character mutters in several clips, in a futuristic yarn?

The audience at the Avatar screening at Westminster Promenade 24 in Westminster, Colo., applauded politely when the lights flicked back on. The crowd, only partially filling the voluminous theater, seemed impressed by the intensity of the battle sequences.

But a few early reactions were mixed.

One attendee from Golden, Colo., who preferred not give his name, applauded the immersive experience Cameron concocted via the 3D approach. But he said his initial peek at the film online - the film’s first trailer debuted yesterday - had him fearing the worst.

“This is gonna be like Delgo writ large,” he said of the recent animation bust.

Steve Oatney, 40, from Aurora, Colo., said he was “blown away” by the material in the online trailer.

“This is twice as good,” Oatney said after seeing the film clips. “It’s extremely impressive.”

Oatney thinks a good film doesn’t need the kind of marketing push Cameron is attempting with the sneak peek. But having had the chance to see the material, he’s now more likely to check out the finished product once it hits theaters.