close
The documentarian was given full access to Vogue's Anna Wintour for his new film.

R.J. Cutler and the Giving Subject 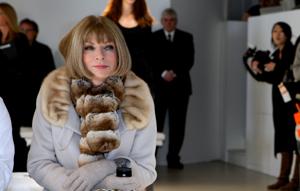 R.J. Cutler shot 320 hours of footage over the nine months he spent with the editors at Vogue Magazine. He did this for The September Issue, the fashion doc that gets closer to the mysteriously private and professionally powerful Editor-In-Chief, Anna Wintour, than any other media has before. Her colleagues refer to her as “The Pope” of the “Church of Fashion,” she inspired the villainess played by Meryl Streep in The Devil Wears Prada and her choices (what goes into the magazine and what does not) determine the trajectory of an entire industry. But according to R.J. Cutler, Wintour’s a powerful woman with the same weaknesses we all share. “Everyone bows to Anna Wintour but the people she values most, and that’s very resonant.”

Though Cutler’s documentary focuses intensely on the months in which the Vogue staff builds, edits and re-edits the September issue (that year it was the largest issue published in the magazine’s history), it also features some interesting comments on the necessity of fashion, which can appear at once staggeringly frivolous and also earth shatteringly crucial. Each character, in one way or another, chimes in on the industry’s legitimacy—they all take their work as seriously as brain surgery but all know the result of their labor is not nearly so imperative. One scene, in which the director speaks candidly with Wintour’s daughter Bee, exposes a tension that Wintour’s demeanor never betrays. Cutler says, “One might say ironically, one might say in a way that reflects she’s just like the rest of us, Anna Wintour has to deal with some self-doubt and her self-doubt comes from her family. What do you know?”

Wintour is the film’s principle subject, but her development runs in tandem with that of her colleague, stylist Grace Coddington. Coddington figures into the film very prominently, for while the decisions made originate from Wintour’s desk, Coddington produces most of the high profile images that support her decisions. We see Coddington produce these incredible photo shoots that evoke the atmosphere, romance and drama we’ve come to expect from the pages of Vogue —they’re photos that sell by virtue of their innate glamour. However, the power play between the two potent women is the source of much of the conflict in the film. As Coddington shows Wintour clothing, much is rejected, then those surviving items inspire a shoot and then the resulting images may or may not be included in the final issue. That work could be validated with publication or discarded like last week’s vegetables. Cutler explains this tension between the two women was his principle cause. “Every frame of this movie services the narrative of Anna Wintour and Grace Coddington and every scene is either illuminating Anna or Grace of their relationship.”

It’s not a catty tension, these women are professionals upon whom an entire industry relies, and they’re both British, leading to a fetchingly terse repartee that’s littered with dry silences and short exchanges. Yet, it’s clear everyone involved is dedicated to the magazine with utter firmness. On the matter of fashion (is it frivolous or is it virtuous? Is its frivolity a virtue?) Cutler says, “Once it gets out in the other characters, this theme (the tension between the legitimacy or illegitimacy of the industry) is about what it means to commit yourself so thoroughly to work that means so much to you.”

The September Issue opens in New York, Los Angeles and other select cities on August 28th.