close
We sat down with Rose Byrne to discuss her role in Fox Searchlight's Adam, an unconventional love story.

Searching For a Connection 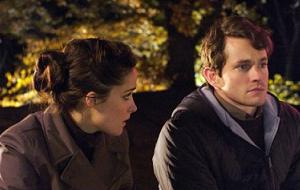 Love is hard, but it's even harder when your crush is under the sway of Asperger's—a mental condition on the Autism spectrum that makes empathy as impenetrable as cement. In Max Mayer's Adam, Fox Searchlight's next bet to follow the success of Juno and Slumdog Millionaire, Rose Byrne and Hugh Dancy star as a young Manhattan couple named Beth and Adam who make Venus and Mars look like neighbors. With Oscar buzz building since the flick hit Sundance, B OXOFFICE sat down with Byrne to ask her about falling in love with a handsome man who, as Beth says, "will never look her in the eyes and understand how she's feeling."

Do you see it as a film about a very, very particular relationship or as a metaphor about communication in all relationships?

Can I say both? I feel like it is very specific about these two people, reactions I've heard really connect to it. Women saying, 'I relate to this and my boyfriend doesn't have Asperger's.' It's universal, I think, and that's a testament to Max that the script transcends beyond Adam and Beth.

Before Adam gives a name to his part of the relationship dynamic, she seems to clutch at reasons why the awkwardness is her fault—she's an only child, is one theory. Can you tell me more about what baggage she's bringing to this?

There's this process, this unveiling of his condition, and yeah, she says to her father, 'What's wrong? Is it me?' She's had this litany of bad relationships so she thinks she's just getting another refusal, this one from a weird guy in her building who won't even go on a date with her. On a superficial level, her ego's been a little bit hurt. She's like, 'I'm not an ogre—why can't I get some sort of attention from even this guy?' He seems to be really aloof, but obviously it's more complicated than that.

When she finally sees the obstacles ahead of them, why does she try so hard to make this work?

She does, but it threatens to become too much for her. The difficulty of it nearly outweighs the benefits. But she's not judgmental as a person and I think he does win her over in his own strange way. He shows her the raccoons and outer space and he's not bad to look at. She's attracted to him and she has natural curiosity about her— empathy and patience—she's very unconventional in a lot of way. I think that lends itself to someone like Adam, but it is difficult. It's not easy at all. It's a debilitating condition in many ways.

Even though it's called Adam and it's nominally about introducing us to this character, the weight of the decision—and really the thrust of the plot—is on her shoulders.

How did you handle being the audience's eyes?

I was very daunted. That's what scared me about the role, how big it was. But you just roll up to set. That's all you can do really is just be prepared and show up. And it sounds glib but really try to embrace it and have fun with the whole thing. But it was very daunting, absolutely. There's not much going on but Hugh and I for two hours so if that's not going to work, then—but luckily, I think it does.

What role does New York play? The setting is already a culture where people are isolated and struggle to connect with people.

For me, I think that New York gives it a sophistication and a cinematic quality. And it's a melting pot still, and it reflects that with this random people in an apartment together.

I kept thinking about the film Marty, which was similar except for the fact that Hugh Dancy is incredibly good-looking. That casting really seemed to change the course of the movie.

Right, what if they had cast somebody more unconventional? At least he's pretty nerdy in the film. He's not exactly Gregory Peck—he's sweet, rather than dashing. But on a very superficial level, there is an attraction there for her. Myself, I don't always go for conventional, by any means. I'm always much more attracted to character than anything else.

Do you feel like this is the first relationship that he's ever tried?

On set, it was sort of decided that he'd been with women before, but probably not for that long. This was one of the more serious-type things, definitely, falling in love

What did this movie let you do that you'd never done before.

Being such a huge role—being a lead—I hadn't done that for a while in a film. And the comedy was new and I really went for it, and some of it worked and some of it didn't. It was liberating in a way when you're used to being restricted to just a number of things to be so anything-goes. Max encouraged that, and that's daunting because you don't know whether that's going to work or not..

What do you want people to talk about when they leave Adam ?

For me, when I walk away, I feel like it's about communication. Between anyone—the human condition. Reading people, behaviors, the endless mystery and is this just a big joke. Why are we programmed like this? But that's me; you can walk away with a lot of different things. It's a film with heart, which is lovely.