close
If Rob Marshall directs the new Pirates of the Caribbean film, it won't be the first time a popular franchise found a new director. 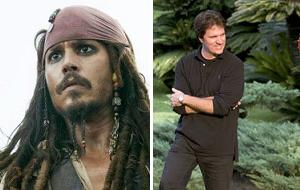 The announcement that the Walt Disney Co. Is talking to director Rob Marshall to take over the wildly popular—and profitable— Pirates of the Caribbean franchise may have some wondering if the head of the studio has been imbibing too much rum.

After all, it was the vision of director Gore Verbinski that resulted in the first three movies being enormous hits, despite initial concerns that a film based on a theme park ride was dead in the water.

But does the director matter that much once a movie property has graduated from “sequel” to “franchise"?

Hollywood history is filled with examples of new directors breathing life into tired old properties, as well as directors who took beloved franchises into directions that made fans howl.

The more rabid the fans, the more carefully a studio needs to tread. Fans of the Twilight books were wary when it was announced that Catherine Hardwicke, who directed the first Twilight film, would be replaced for the second in the series.

Chris Weitz, hired to direct New Moon, had to win over the fans by writing them an open letter. In it, he emphasized that he had been given the blessing by book author Stephenie Meyer.

So why do studios change directors in the middle of popular movie franchises?

Availability is often the reason. Studios don’t know when they release a movie that it will be successful, let alone the first in a series, says David A. Weitzner, a veteran movie marketer who oversaw the campaigns for such films as Star Wars and E.T.

When a movie becomes a hit, the pressure is on to produce a sequel as soon as possible. But that often conflicts with a director’s schedule, which might have him or her committed to another project first.

“The studio has to make a decision—who owns this?” Weitzner says. “The answer is, ‘We do and we can’t wait for X director.’”

Reports about Hardwicke suggested she wanted to take more time to craft the second film than the studio was willing to give. The script for New Moon was delivered the weekend that Twilight opened and the studio was anxious to start the sequel. That need for speed clashed with Hardwicke’s reluctance to be held hostage by a release date.

Creative differences is another reason. A story left in the hands of one director can get stale. The daring risk taking that made the first film a hit can be replaced with a kind of tunnel vision, in which studios, directors and actors play it safe in order to protect the golden egg-laying goose.

So studios sometimes change directors to shake things up, to breathe new life into a stale franchise. Such was the case when both a new actor and director were chosen to make the 2006 James Bond film Casino Royale.

The Bond films have had numerous directors over the years. Few have ever directed more than one. Director Martin Campbell, with the Bond film GoldenEye under his belt, was called in to reinvent the character along with British actor Daniel Craig. The result was a huge hit.

But that didn’t stop the producers from enlisting yet another director for the sequel, Quantum of Solace. Whatever the reason for shaking and stirring a successful re-launch, the results could not be argued with. Marc Forster delivered the most successful Bond film ever.

But will Forster be back? In interviews, he has cast doubt on the possibility, saying he is inclined to make the next film lighter, more humorous and sexy, a direction the producers may not want to go.

Others films have also been revived by a new director, most notably the Batman franchise, which was reignited when Christopher Nolan made Batman Begins in 2005.

In the long run, the director is but one of many factors that determine success. Popular franchises such as the Harry Potter films have thrived despite of, or perhaps, because of, a variety of directors.

The same can be said of most of the Star Wars films, as well as the Indiana Jones series.

“The glue with Indiana Jones was Harrison Ford and the story,” Weitzner says.