close
The cast of Garry Marshall's Valentine's Day may be able to do some serious damage at the box office.

The Value of an Ensemble 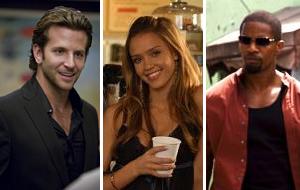 The upcoming Garry Marshall film Valentine’s Day features a who’s who of who’s hot in Hollywood.

They’re all signed up for the upcoming romantic comedy which follows a gaggle of romantic relationships based in the City of Angels.

The multiple-star formula worked to modest effect with this year’s He’s Just Not That Into You, which squeezed in Ben Affleck, Jennifer Aniston, Jennifer Connelly, Bradley Cooper and Scarlett Johansson into the rom-com mix.

But is it wise to stuff a movie with so many big names? Do audiences tune out when confronted with so many movie stars in one marketing blitz?

John Wildman, head of press and public relations for AFI, thinks the law of diminishing returns kicks in with some of these oversized casts.

The indie film Lymelife, with a distinguished cast including Alec Baldwin and Timothy Hutton, got a “fine reception” at Sundance earlier this year, Wildman says. But the film struggled mightily when it finally reached the public a few months later. The 2007 comedy The Ten featured a wealth of top talent, from Paul Rudd to rising star Jon Hamm, but it made but a fraction that fellow comedies like Role Models hauled in.

"What ultimately happens with those films is rather than having a collective gain with everyone’s box office mojo, it becomes a muddled group think. There’s no one person for people to focus on.” says Wildman.

The press push for He’s Just Not That Into You focused chiefly on Aniston and the on-screen appearances of real life couple Justin Long and Drew Barrymore.

Wildman recalls the movie posters promoting ‘70s disaster films by Irwin Allen. Those one-sheets featured a dominant image like a burning building, and then at the bottom a row of pictures featuring the large, all-star cast. Or former all-stars, to be frank.

“There it made a difference,” he says. “I get to see all these movie stars all at once. Now it’s hard for us to focus.”

Jenelle Riley, National Film and Television Editor for Back Stage Magazine, says she’s a proponent of such overstuffed casts for a selfish reason.

“If I’m disinterested in one storyline, I can look forward to a new one in a few minutes,” Riley says.

These kind of ensemble-heavy stories also let a few fresh faces shine and offer a creative perk for its stars.

More recently, “Entourage’s own E, Kevin Connelly, fared well in He’s Just Not That Into You, a role that made sure he didn’t have to carry his biggest film appearance to date," adds Riley.

“I've also noticed some actors up their game when put into an ensemble. Ryan Phillippe's best work to date was probably in Crash,” she says.

Valentine's Day is currently set to hit theaters on February 12, 2010.