close
The writer/director reveals why he felt compelled to make a second installment in his version of the popular franchise. 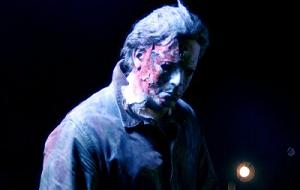 Rob Zombie wasn’t completely satisfied with his 2007 remake of the slasher classic Halloween.

Sure, the film grossed $58 million domestically and helped pave the way for this week’s sequel, Halloween 2.

But Zombie thought the film, which featured a gratuitous amount of blood, gore and violence, looked too “clean.”

Sounds like Zombie, the rocker turned horror auteur, isn’t feeling any pressure from the ghost of John Carpenter’s genre staple.

This masked murderer is now his own creation.

“I never wanted Michael Myers to be the bogeyman standing in the shadows. I want him to be a character,“ he says.

For the sequel, Zombie further sketches out Myers via his visions of his late mother (again played by Zombie’s wife Sheri Moon Zombie).

“For me, the best part is you really feel like you understand Michael Myers,“ she says.
“It’s not just a slasher film where you don’t care about anyone. You get to know these people.”

The film’s writer/director says Myers is a “Unabomber” type character in the sequel, a figure “living on the fringes of society.”

Some critics weren’t pleased by the fact that Zombie’s Halloween shed so much light on the film’s killer, a cinematic equivalent of too much information spoiling the mystery behind the mask.

Zombie brushes aside the comments.

“It’s my job to do what hasn’t been done. Most criticism is based on what’s been done before and what they expect,” he says. “How disappointing would it be to do exactly what I was expected do to?”

Zombie didn’t plan on revisiting Halloween for a sequel. But when the powers that be started plotting a follow-up to his hit film, he began feeling protective of the property.

“When I started hearing some of the pitches for part two, it pissed me off. I wanted to resolve the story myself,” he says, adding that the studio wanted to focus much more on new teen-age characters rather than those at the heart of his first film.

Zombie, who says if he had to remake another horror classic he wouldn’t mind tinkering with The Creature from the Black Lagoon, isn’t necessarily wedded to the horror genre.

“The type of movie I’m most attracted to is gritty crime drama, like the movies ['Dirty Harry' director] Don Siegel made. That’s where I would very much excel,” he says.

Zombie is nothing if not confident. But he’s genuinely amazed he’s been able to swap out a microphone for a director’s chair with so few hiccups.

“Making the transition into film is almost possible. To have success in one field is hard enough. It seems like you’re asking for lighting to strike twice,” he says.

It’s even better that horror junkies are curious to see what Zombie has up his sleeve next.

“As a director you want to be associated closely with your work. They go see the movies because of you … that’s the biggest compliment you can have as a director,” he says.