close
We caught up with Chris Miller and Phil Lord to discuss their new 3D flick, Cloudy with a Chance of Meatballs. 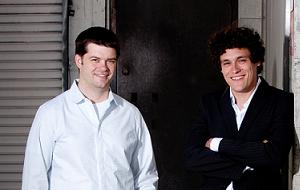 The 1978 kids classic Cloudy with a Chance of Meatballs was a near-plotless picture book with an appetizing hook—the land of Chewandswallow ate their weather. Orange juice drizzled at breakfast, hot dogs hailed down for lunch. Shaping the story into a smart all-ages comedy was a tall order, and first-time feature writers, directors and college best friends Phil Lord and Chris Miller have served it up with the quality of a four-star feast. Here, they talk to B OXOFFICE about spending six years playing with their food.

You worked on this film for years—did it affect your eating habits?

LORD: I would say that I've become an even bigger eater than before, and it's mostly because of the adrenaline we're going through—all the anxiety and crazy working hours makes it so I can't keep weight on. I'm rail-thin and I eat two meals three times a day.

MILLER: His metabolism is ridiculous. But especially when working on the cheeseburger rain sequence, we'd decide that we needed to have cheeseburgers for lunch. And when we were modeling gummy bears, we bought a bunch of different brands of gummy bears to see what the differences were in the molding of their little faces. They were sitting around a lot and we ate a lot.

That cheeseburger rain with the pink clouds behind it reminded me of a Lisa Frank cover—unicorns could have been coming out of it.

MILLER: Why didn't we put unicorns in it?!

LORD: We made a mistake! There's a big rainbow fetish in the movie—we put rainbows all over the place. Maybe that makes up for the lack of unicorns.

How would you describe the animation style? I don't think I've seen anything exactly like it. The texture almost looks like Claymation sometimes, even though it's all computer.

MILLER: We were influenced by a lot of things including the Muppets and the classic animation style of the '50s and '60s. The Muppets were appealing because they're simple characters who are very expressive. We liked the floppy way they moved around, but they can still convey emotion.

LORD: When you think about trying to make very stylized characters in three dimensions, you do wind up looking at Rankin/Bass [ Frosty the Snowman, Rudolph the Red-nosed Reindeer ] and stop-motion films. We also wanted the characters to have a really broad dynamic range in how they move, especially in their faces. And that means the textures on their faces have to be relatively simple because you don't want to see a bunch of freckles tracking all over the place—it starts to look very uncanny valley. But we also wanted it to look sophisticated and high-end, so the characters have this skin that has a real, nice, warm, translucent plasticine feel. We wanted everything to feel very tactile and handmade because on the computer, the straight edges and machine things are relatively cheap. If you try to make it handmade, it feels high quality.

What is your process to writing humor for both kids and adults? There's so many ways different cartoons try to do this, but I really liked your approach.

MILLER: Well, this concept is very kid-appealing. The fact that it's animated alone means it's going to appeal to kids, and so we decided to set out to make a movie for ourselves, that would make us laugh. That was basically our mantra going forward: Lets never talk down to kids. Lets just make a movie we think is funny, and the kids will enjoy it naturally.

LORD: It doesn't hurt that Chris and I are both a little bit childish.

MILLER: That pervades through every choice we made. With the casting, we wanted to cast our comedy friends and heroes, which is why we got people like Bill Hadar and Anna Faris and Andy Samberg and Mr. T and Neil Patrick Harris and the rest of our talented bunch. We wanted to have a comedy feel that was progressive and modern, and not safe and dumbed down.

LORD: All of the things that we loved growing up—Muppets, Sesame Street, Warner Brothers cartoons, The Simpsons —these all had kid appeal, but they never talked down to you. You get the sense that the people making them were just trying to crack themselves up. Chris and I went back and looked at those early Sesame Street sketches, particularly Bert and Ernie, and they're still very funny. They're really smart relationship comedies. I don't even want to say they go over the heads of little kids, they're just still effective today.

I'm a big fan of the original book—I even bought the sequel, Pickles to Pittsburgh, when it came out when I was in college. It was my favorite book when I was a kid, probably because of the food.

MILLER: It was Phil and my favorite book as well.

What was it like to sit down and realize you had the freedom to add characters to your favorite kids book?

LORD: It's terrifying! We love this book, as you do. This is our favorite kids book from growing up. When we knew they had the property, we conspired to get it and insisted they let us work on the project. We wanted to honor everything that was great about the book, but it was clear that the book doesn't really have any characters in the town of Chewandswallow. It was clear that the movie would be substantially different from the book. It was also clear when we knew the movie was going to be in CGI, and eventually when we knew it was going to be in 3D, that the illustration style wasn't going to translate, so we also knew the look was going to be a little bit different. So we were very preoccupied with maintaining the tone of the book, which is ironic and hilarious and heartfelt at the same time—we really wanted to honor that. And at the same time, quote the book as often as possible and insist on including a lot of its signature moments, and expand on some of them, like the Jello mold and the disaster section at the end of the book. But luckily, Judi Barrett and Ron Barrett, who created the book, were incredibly gracious in allowing us to expand upon the book. They love the film and they've been really supportive. They've become great friends.

The film also values nerdism. I liked its message a lot—the value on brains, and how Anna Faris' character flips the makeover script. When she puts her hair up and her glasses on, then she's the romantic heroine.

LORD: I'd say that the insistence on nerdism is really out of self-interest.

MILLER: We're becoming a more geek-friendly culture. And we are in great support of that. It seemed a natural outgrowth from the characters we'd developed, how to embrace your inner geek and celebrating individuality.

Did you have a small panic moment when you saw that Up also had an animal wearing an animal translator?

MILLER: When that second trailer for Up came out, we definitely panicked.

LORD: We freaked out.

MILLER: The animal thought translator in our movie has a huge payoff at the very end of the movie—the crux of the movie relies on it. We wanted to find out if anything similar happens in Up because then we'd have to commit ritual harakiri. Thankfully, it was treated in a completely different way and many people feel that they're totally different. But we had put it in six years ago when we started the script, and these things happen all the time.

LORD: In comedy, it's often the case where two people have the same idea. It's funny. Neil Patrick Harris [who voices the translated monkey, Steve] called us up one day and said, 'Guys, I just saw an advance screening of Up, and you guys might want to see this.' He'd just recorded a bunch of stuff for our movie, but he hadn't seen it yet. He'd just recorded a bunch of the dialogue. We were aware of the problem and a few weeks later we had a test screening. Almost everybody in the screening had seen Up the weekend before. Nobody mentioned it. And we called Neil back up and said, 'We're in the clear! Think we're going to be fine.'

MILLER: And all of the kids said that Steve was their favorite character. We were like, 'Whew!' But we were super nervous.

LORD: Maybe Up just primed the pump for us.

We can buy them now, because they're obviously true.

MILLER: It's an amazing world we all live in.

When do you think the world will realize that Anna Faris is the greatest comedy gift of this generation?

MILLER: She's so talented. She's so warm and outgoing and funny. And her voice is so rich. She was perfect for the part. We were trying to find someone who is much smarter than they let on, and that is her to a T. She's often cast as this B-character, but she comes into recording sessions reading the New Yorker. She's a really gifted, talented person. Kudos to her for being awesome!

LORD: She is this rare thing which is a female comedy star who can headline a movie, and studios will allow to headline a movie. There are very few of them, and we're really looking forward to seeing what she does next. She insists on doing characters that are as funny and weird and eccentric as a comedy that's top-lined by a male lead.

You guys have been friends and partners since college. What's the secret to enjoying each other's company and working together well?

LORD: [Laughs.] I don't know that those things always happen at the same time.

MILLER: The secret is not sharing an apartment. When we first moved out, we had side-by-side Ernie and Bert-style beds. We saw each other all the time. All the time. It is kind of like a marriage in that you have to work at it and you have to respect the other person. It's helpful that we have very similar takes and we both make each other laugh. That's very helpful.

LORD: And we also every once in a while have to go on a date where we don't talk about work. Go to a basketball game or something and just be normal. That tends to help.

MILLER: It would also be helpful if we were able to say, 'You go do the writing and I'll do the visuals,' but we do not divide and conquer. We both do everything. We're incredibly ineficent in that way.

LORD: Chris just touched on something about collaboration across the whole crew behind the film. When you really admire the other person and what they have to contribute, it makes it a lot easier. Chris and I feel that way about each other and we also feel that way about all the crew members that we work with. We were so in awe of their talent and abilities and graciousness that it made it really easy to collaborate.

MILLER: It's really wonderful. If you hire great people, it's much easier to let them do great work. The 500 people working on this movie are amazing artists and technicians—they're talented, all of them. You have to be able to be open to letting in new ideas, and let the best ideas win. So many people got to contribute a lot of great things to this movie.

And you gave them a nice nod by opening the film with “A Film by a Lot of People.”

MILLER: We wanted to have a “film by” credit that paid tribute to so many people working so hard on it. It's just been really great.