close
We caught up with New Moon star Taylor Lautner to discuss his work on the latest installment in the Twilight series. 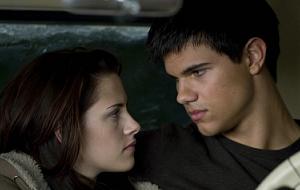 Seventeen-year-old Taylor Lautner is the youngest star in Twilight 's fantastical love triangle, but he's an old pro at discipline. At 11, he was the top ranked global champion in four styles of karate; at 12, he won the Junior World Championship. The next year, Robert Rodriguez [ Spy Kids, Sin City ] cast him as the kiddie action hero in The Adventures of Sharkboy and Lavagirl in 3D, followed up right after with playing one of the brood in Steve Martin's Cheaper by the Dozen 2. As Twilight 's Jacob—the Quileute Indian high-schooler who learns how to transform into a werewolf just as his classmates learn to shave—Lautner was launched into international stardom, and the most surprising thing about it is the young athlete was first considered too scrawny to make the transition to the brawnier, more action-packed sequel, New Moon. One year and thirty pounds of muscle later (every ounce of which was breathlessly detailed on fansites), Lautner's on the cover of magazines, he's featured prominently on New Moon 's poster and, true to form, the young actor is already hard at work on the third installment in the series, 2010's Eclipse. Though he's hardly had a break since he first entered the dojo as a first-grader, Lautner's in high spirits, laughing his way through an interview where he tells B OXOFFICE about his secret love for romantic comedies and whether he'd ever date a fan.


If the last two books in the series hadn't already been written, what do you think Jacob should do to win over Bella?

I don't think he would have changed anything, and I don't think he should change anything. Jacob and Edward are extremely different guys and it's just whether you want one guy or another. Jacob is himself, and he has a relationship with Bella that Edward doesn't. And Edward has a relationship with Bella that Jacob doesn't. So I wouldn't change a thing.

As an actor, how do you make the audience root for Jacob and get invested in his feelings when the outcome of the love triangle is already known?

What is it like for your family and friends to see people scream at pictures of you topless?

[Laughs] It's weird. It's embarrassing for me, and I'm sure it's awkward for all of them.

Have you gotten teased about it at family dinners?

Not yet, and I'm hoping that doesn't happen because I'll start blushing.

You came into acting from karate. Do they overlap—they seem to share the need for focus and concentration.

It's a lot of hard work. That's probably the most I got out of karate: it was a lot of work. A lot of training. And you need that for everything in life.

It's helped you take on these physical roles with Twilight and the Robert Rodriguez film.

Absolutely. And I love action, so it definitely helps with that.

Everybody has been talking about the muscle that you've put on. The furor around actors and their weight changes is something you usually see happen with older actors who are more established. You're 17—what is that like to have people paying so much attention to your biceps?

It's different. It was all for the job, and that's all. I knew that Jacob was going to transform not only mentally, but physically as well, from Twilight to New Moon, and I wanted to be able to portray him correctly for all the fans. That was my motivation. It was a lot of hard work, though.

Does your old karate coach wish you had that much muscle on you back when you were still competing?

I love Jacob and Bella's relationship. It's very different from Edward and Bella's. Jacob and Bella start off as really good friends. They become best friends—they can tell each other anything, they do whatever together, ride motorcycles. I love that. And then their relationship starts growing into more and more, and you wonder if they're going to go past friends. I love being able to do that. And work with an amazing actress, Kristen Stewart, and all of the help around us, our director Chris Weitz, the whole crew. It's a lot of fun.

What will draw guys your age to New Moon ?

There's a lot more action than Twilight. It's more exciting—it has werewolves and vampires, which creates fights because they don't get along. Not only does the action step up, but the whole story line does as well. Now there's a third person involved.

It's been years since we've had a good werewolf film—it's been vampires, then zombies, then vampires again. What's awesome about werewolves?

They're different. Werewolves are extremely strong, which is cool. But it's a bummer because I don't actually get to play my werewolf. It's full-blown CGI; it's either me or a CGI werewolf. So that's a bummer, but I know they're going to look awesome in the film. I'm excited to see it.

That wolfness—do you have to bring that animal movement in your human performance?

The only difference is in New Moon, I play pre-transformation Jacob, and post. He doesn't transform into a werewolf until halfway through the film. For pre-transformation, the books describe Jacob as clumsy. He trips over his own feet—he's a kid. And as soon as he transforms, he all of a sudden because extremely agile. There's several scenes that show his new agility, so that was the biggest thing I had to bring out.

Not to jump ahead too much, but Jacob's love life takes a turn in the fourth book that I think might be hard to translate to people who haven't read the series. Do you have any thoughts on how to handle his 'imprinting' on Bella's daughter?

I'm sure it would be different. It was definitely a surprise for me when I read the book. But we're just trying to take it one movie at a time, and nothings been confirmed yet on the fourth, so we're just staying focused on Eclipse at the moment.

What is your favorite thing to do while shooting a movie?

I always carry a football around with me, and there's a lot of people on set between the crew and the cast who like to play, so I'm always throwing the football around and that keeps me entertained.

Whose career do you want to have?

I've always loved Matt Damon. I love the Bourne series. Brad Pitt, Denzel Washington. But I'd also like to change things up. Not only do I like the action movies, the drama movies that all three of those actors do, I'd also love to challenge myself with different roles. Romantic comedies—I think the best examples would be Gerard Butler, Ryan Reynolds.

Ryan Reynolds has been so under-appreciated—he's amazing.

Tell me then about working with Garry Marshall [ Pretty Woman, Runaway Bride ] for Valentine's Day.

It was awesome. I was so glad I got to do that before I went back and filmed Eclipse. Working with Garry—that's a once in a lifetime thing. It was a lot of fun and I can't wait to see it when it comes out in February.

When it comes to romantic comedies, he's the king. If you wanted to get into them, there you are already.

Absolutely. I know—I couldn't have asked for more.

Are you romancing the other Taylor, Taylor Swift, in it?

Yes, in the movie. Which was a lot of fun.

Did you heart break for her when Kanye jumped in during the video music awards?

What is a movie you love that you're embarrassed to admit?

The Notebook. I don't think I should be embarrassed to admit it though—it's a great movie. I'm not embarrassed. I'm saying it proudly.

One of the things I think is interesting about Jacob is he's an American Indian character put out there as this gorgeous romantic lead. The last time I can remember that happening, Daniel Day-Lewis or Kevin Costner were involved.

You know, I really haven't thought of it like that, so that's interesting? Thinking about that, yeah, it goes back to Last of the Mohicans.

You have some heritage yourself from your mother's side?

I'm mainly Dutch, German and French. That's pretty much who I am.

I heard there was also some Ottawa and Potawatomi?

We have no idea how much there is—it's in my far distant background.

Fair enough. I'm Dutch as well, so way to represent us—we don't get enough credit either.

Would you ever date a fan?

I don't exclude anyone...

What has that been like, dealing with the fan experience?

All I can say is it's mind-blowing. I, myself—and nobody else—ever expected it, so it's incredible to have the support and the passion of the fans behind us. We're so thankful because we wouldn't be here today on movie number three in Vancouver if it wasn't for them. They're amazing.

I saw that you have two books written about you on Amazon.

One is an unauthorized biography and the other is a 94-page picture book.

People could say that you're half-alien, half-prince.

And everyone would be believing it. That would not be good. It's different. This whole franchise is unlike anything else. Which is a good thing, it's awesome.

Do you avoid Googling yourself?

Absolutely. That would not be good if I did that. Definitely try to stay away from that or it could get in your head.

Are you parents doing anything to try to keep your life in check? 'Yeah, yeah, yeah, there's millions of girls screaming, but you're still a normal kid?'

Absolutely. I'm hoping it doesn't take too much work. I feel the exact same—I'm the same person as before. It's just a completely different world. I have my world, and then I have Twilight world.