close
We caught up with Anne Fontaine and Phillippe Carcassonne, the team behind the new fashion biopic.

Fontaine on 'Coco Before Chanel' 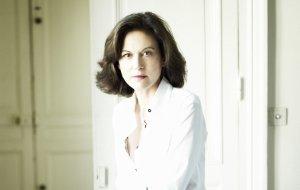 Anne Fontaine is an established filmmaker in France; though only a few of her films have had the regular arthouse level exposure stateside. Her husband, Phillippe Carcassonne, has produced all but one film she’s directed (2005’s Entre ses mains ) and while he didn’t produce that picture, he was very involved. They’re a terribly professional couple, never making obvious the marital connection they share. This seems relevant as their recent film, Coco before Chanel, the story of the woman regarded as last century’s most important couturier, eschews the obvious connections of the traditional biopic.

Fontaine said she chose the period of Chanel’s development because it’s the time in Chanel’s life when she, like the audience, doesn’t really know what will become of her. Abandoned to an orphanage at the age of 10, Gabrielle Chanel (Audrey Tatou) and her sister Adrienne (Marie Gillain) struggle through their youth and young adulthood without much comfort. The Belle Époque is a period known for aesthetic romance, but Fontaine avoids showing the girls’ poverty with any nostalgia. For as relevant as the visual is to this character and her universe, the journey she takes is rooted in her identity, and that alters the ideological landscape considerably. Fontaine says of the character, “It was interesting how the fashion and the life were completely mixed. Chanel does not have, in her life, this idea of fashion—no, she has to do for herself first. A new way to be, a new way to wear clothes, of course, but it is an initiation, a becoming and the birth of a new person.”

Certain comparisons are facile. We can look upon Chanel as an icon, a woman in a man’s world who made herself from nothing, but Fontaine’s pursuit of the character makes the clear but subtle point that Chanel’s clothing, the thing that made her a household name, aren’t simply the product of her influences but the result of her own search for purpose. Fontaine says, “She’s liberating something very important but she’s doing it with out any ideology. She liberates the body of the women from the corsets but also from all these decorations because it was the obsession of the women in France at the time to make men happy—not to work, not to succeed by themselves, but to seduce.” Yet, Chanel, whose nickname, “Coco” came from a skirt flipping song and dance she did in the early part of her life about a lost dog named Coco, understood that her involvement with men and power was a route to attaining her ambitions.

After being found in a provincial club by a member of the leisure class, Chanel is taken as a courtesan. She’s difficult and unfriendly and all those around her seem to find her as aggravating as irresistible, but she creates a niche for herself and she watches those around her. Chanel borrows her keeper’s pajamas and cuts his shirts for material to alter her dresses. In the process she improvises and reinvents. “If you imagine who Chanel was and you know that she was not an intellectual—she didn’t learn to be an artist, she had to observe. How can she observe? Through the eyes. What is interesting is all she observes is the future—all her style begins through the eyes. It’s not an intellectual point of view. It’s an intense way to look at the women and the society. She creates a new way to be a woman but for that she knows very well what she hates. Chanel had no other choice than to observe.” This casts another light on one of the few fashion rules Chanel states in the film: “Black is the only color that brings out the eyes.”

It’s poignant to note, as addressed by Carcassonne, that Chanel was not proud of her own career. Nearly referring to the earlier part of Chanel’s life, during which she was a seamstress by day and a low-end cabaret singer by night, Carcassonne says, “she would have preferred to be a singer or a dancer, and later on in her life she would compensate by patronizing writers and other artists. She was proud of her success but not of her vocation. Like Jerry Springer.”

The comparison is humorous but also surprisingly elegant and crisply neutral. When you consider most biopics make heavy-handed effort to connect the dots (i.e. tragic childhood gave her dogged determination, nun’s habits and men’s clothing inspired her aesthetic) Coco Before Chanel allows the viewer to participate in what Fonatine referred to as “a culture of observation”—we see, along with her, and her becoming feels very close to our own. However, our becoming is distinct from her own and that neutrality affords us the opportunity to see the character as the icon we expect her to be, if more fairly personalized, filled out and enlivened by the glint in her eyes.