close
Legendary thesp George Hamilton discusses the film that has put his youth on display to the world.

Hamilton Talks 'My One and Only' 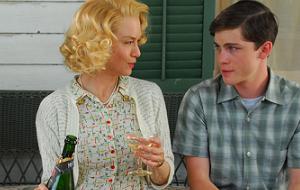 George Hamilton is back on the big screen with the new film My One and Only.

This version of the debonair actor isn’t wooing the ladies, or charming people out of their socks. He doesn’t even have a tan.

The new film, based on the actor’s life, follows a young Hamilton (Logan Lerman) who was dragged from city to city during the 1950s by his feisty single mother (Renee Zellweger).

It’s a side of Hamilton we rarely see, and he couldn’t be happier to show it off.

“For years I’ve been thought of as an 8x10 glossy, someone who joked his way through life,“ Hamilton says.

When recounting the origins of this latest project, the Hollywood vet recalls discussing the art of being a movie star with Cary Grant years ago.

“I just keep the image of the man I created. I’m not Cary Grant. I’m Archibald Leach,” says Hamilton, recalling advice he followed for decades.

Years later, he met Grant again after an event at which the screen icon had opened up about his childhood for a rapt audience.

“It’s the only challenge left,” Grant told Hamilton about why he finally decided to reveal layers of his actual self.

He did have some trouble letting go of his own life story. Hamilton, who served as executive producer on Only, initially balked at how the film portrayed his mother’s flaws. He eventually relented, letting the film’s talent tell the tale.

The results paid off for him … eventually.

“When I went to see it the second time, I was moved to tears. I couldn’t express myself,” he says. “It got me.”

My One and Only shows how Hamilton's mother, after leaving her philandering husband (Kevin Bacon), tried to find a new father for Hamilton and his brother, Robbie (Mark Rendall).

Her comical results appear in the film, although Hamilton shared one that didn’t make the final cut. He recalls his mother visiting an old beau, a war hero with whom she hoped to reunite.

Shortly after seeing him again for the first time in years, she beat a hasty retreat.

“Oh my God, he let himself go,” he recalls. “The guy would be smiling and waving at her, with no teeth.”

Hamilton, even at 70, hasn’t let himself go. He still sports his iconic tan and a full head of hair.

And he isn’t done with Hollywood. He understands acting roles for 70-somethings aren’t aplenty, but he’s got other projects in various states of production.

One such project is Love at Second Bite: Batrimony, the belated sequel to his surprise 1979 smash Love at First Bite. Another looks at oil in the 1930s.

“These are things I’ve always been passionate about,” says Hamilton, who will serve as a producer on the films. And even though it took decades for My One and Only to make it to the big screen—the original idea came together with a deal forged with the late Merv Griffin—Hamilton has the patience to bring his new films together.

“When they‘re ready I can put the package together and make it happen,” he says.