close
Zombieland, which stars Woody Harrelson and Jesse Eisenberg, is not the first movie to mix horror with comedy. 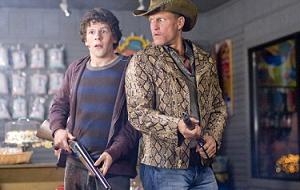 Audiences checking out Zombieland this weekend won’t know whether to laugh or scream.

The new film, a mashup of Night of the Living Dead and your standard buddy comedy, represents the latest attempt to fuse the horror and comedy genres.

It’s a formula that gave us screen classics ( An American Werewolf in London ), campy romps ( Tremors ) and stink bombs ( Vampire in Brooklyn ), but typically much more of the latter. The film genres may seem light years apart, but there's something instinctual about either laughing, shrieking, or a little of both while in a darkened movie theater.

In Zombieland, Woody Harrelson plays the shoot first, then shoot again later hero trying to beat back the undead alongside a nebbishy sidekick (Jesse Eisenberg). The zombies move faster than they do in George A. Romero’s Dead films, but Harrelson’s mouth is even quicker.

But will audiences approve, or did the poor showing of Jennifer’s Body earlier this month illustrate that crowds would rather laugh or scream, but not at the same time?

Tony Timpone, editor of Fangoria magazine, says Jennifer’s Body proves precisely how hard it can be to sell audiences on hybrids of horror and comedy.

“Horror fans tend to want their horror straight, while comedy fans have plenty of straight comedies to choose from at the local multiplex and don't need the gore to go with the guffaws,” Timpone says.

Audiences will accept a horror-comedy hybrid, but it better be good.

“The list of successful horror comedies is a very short one,” he says, ticking off films like Abbott and Costello Meet Frankenstein, the aforementioned London and Shaun of the Dead.

“ Slither came close, but again, not many people went to see it,” he adds.

“The ones that fail are either not scary enough or not funny enough. Neither fish nor fowl,” he says.

The trick, as Timpone sees it, is to play the horror elements straight. Sure, Lou Costello yukked it up during Frankenstein, but when the big guy with the neck bolts lumbered in front of Costello the horror took over.

Overlap the two genres, he says, and you end up with “lame spoofery,” witness the Scary Movie franchise and Mel Brooks‘ Dracula: Dead and Loving It.

Brooks’ Young Frankenstein used horror elements, but kept the focus on comedy while paying homage to the great Universal monster template by mimicking their spooky atmosphere.

“He had respect for the subject matter back then, but lost his way when he tackled Dracula,” he says.

“ Shaun of the Dead knocked it out of the park already when it came to mixing zombies and laughs,” he says.

Make sure to check out our interview with Woody Harrelson here .