close
Ricky Gervais' new film The Invention of Lying continues the recent obsession with people who don't tell the truth.

on September 30, 2009 by Katherine Guiney
Print 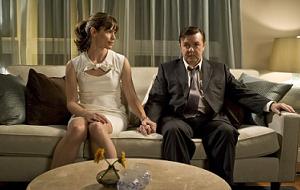 Being told the absolute truth in Hollywood is about as common as finding an actress eating carbs; it’s rare. White lies are just part of the business. But lying in Hollywood is not just limited to age and natural hair color.

Since the inception of the motion picture, Hollywood appears to have been fascinated by lying and has made more than its fair share of movies about the topic.

The newest addition to the club is The Invention of Lying, a comedy written and directed by Matthew Robinson and Ricky Gervais. WIth Lying, Gervais will continue to build a following for himself in the United States after starring in the original version of The Office.

Set in an alternate reality where people can only tell the truth, Lying follows an unlucky loser, Mark Bellison, as he inadvertently creates the world’s first lie. Since every word is believed to be the truth, Bellison, played by Gervais, is able to lie his way to fame and fortune with this unique and newfound ability.

Throughout the film, Gervais’ portly character pursues Anna McDoogles, portrayed by Jennifer Garner, and slowly, but surely, sees the consequences of his deceit snowball out of control.

Although the release of Lying increases the number of movies made about lying, Hollywood’s preoccupation with liars does not just apply to the big screen; the small screen is getting in on the act too. In January, Fox launched the television show Lie to Me, a series loosely based on the work of Dr. Paul Ekman, a psychologist whose ground-breaking research on emotion, expression and deception has earned him multiple Research Scientist Awards from the National Institute of Mental Health.

Ekman notes that interest in the theme of lying, and in deception detection particularly, has risen significantly.

“It seems to be the current fad,” he says. “Whether it will pass or not, I don’t know; but, it’s an issue that’s fundamental to how people get along.”

If lying is indeed the current fad in Hollywood, then Gervais' film is right on trend. When the Warner Bros. picture, which marks the feature film directing debut for both Robinson and Gervais, opens this Friday, it will join the ranks of movies already dedicated to the topic of deception, including:

In this comedy, Jim Carrey plays Fletcher Reed, a divorced father and attorney who routinely lies. After Fletcher promises to attend his son’s birthday party and fails to do so, his son wishes the inability to lie upon his father. The wish is granted and Fletcher experiences a life-changing 24-hours when he cannot help but tell the whole truth, and nothing but the truth. Audiences responded well to the comedy, which was released at the height of Carrey's drawing power, and it grossed $181.4 million domestically.

Starring Leonardo DiCaprio and Tom Hanks, Catch Me If You Can is based on the true story of Frank Abagnale Jr., one of most extraordinary liars of the twentieth century. The film follows Abagnale Jr., played by DiCaprio, throughout the 1960s as he cashes more than $2.5 million in fraudulent checks and successfully impersonates an airline pilot, a doctor and an attorney, among others. The Steven Spielberg-directed film brought in an impressive $164.6 million domestically.

Four women head to the country for a long, relaxing weekend, but end up in a twisted game of deceit as one of the guests turns out to be a pathological liar. This drama, which was directed and written by M. Blash, stars Chloë Sevigny, Jena Malone and Leelee Sobieski. The film received a very limited release before landing on DVD.

In Steven Soderbergh's off-kilter adaptation of Kurt Eichenwald's dense novel, Matt Damon plays real-life whisteblower Mark Whitacre, who deceives his company as well as the federal agents that he works with as he reveals deep corporate secrets. The Warner Bros. release has grabbed a modest $21.2 million since opening in early September.

As for why Hollywood likes to make movies about liars, Dr. Robert Feldman, professor of psychology at the University of Massachusetts and author of The Liar in Your Life, says it’s because “there’s a kind of romance to it. We think of con men and car salesmen, and we think it’s an interesting kind of phenomenon.”

Although it shares a central theme with these previously made films, The Invention of Lying does seem to differ from the pack in one major way: it takes place in an alternate reality. Instead of placing their liar in the world of today, tomorrow or yesterday, Gervais and Robinson put him in a parallel universe that deals in absolutes. This concept makes the film slightly reminiscent of Pleasantville ; however, rather than discussing surface niceties with the main character, the people in Invention routinely remind Bellison that he is, among other unappealing things, fat.

Despite having to withstand the blunt truth, being in Bellison’s alternate reality might not be so terrible. In fact, given the film’s impressive comedic supporting cast, which includes Rob Lowe, Tina Fey, Jonah Hill, Louis C.K., and Jeffrey Tambor, it might be downright funny.

Yet, because, according to Dr. Feldman, “There’s no shortage of liars in the world,” Hollywood still has plenty of “lying” material to go on; so, The Invention of Lying may not be the last of its kind.