close
Megan Fox is not the first actress to stumble at the box office after achieving fame in a popular franchise. 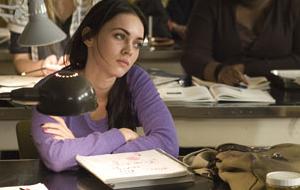 Megan Fox seemed unstoppable after her performances in the Transformers features.

The two films became blockbusters and sparked an avalanche of press accounts centered around the stunning actress. Paparazzi clung to her every curve, and gossip columnists wagged their tongues over her revealing interviews.

It’s not every actress who dubs her director “Hitler-like” on the set.

But the film tanked in its opening weekend, coming in fifth place with a paltry $6.8 million on more than 2,700 screens.

Count Moviefone Editor Kevin Polowy as someone who was shocked by Body ’s measly ticket haul.

“You can't underestimate the value of Fox to the mega-moneymaking Transformers franchise, the year's highest grosser, so expectations were reasonably high for her first star vehicle,” Polowy says.

“The ads played up Fox's sex appeal—teasing the potential of cleavage and lesbian intrigue—instead of trying to prove a genuine horror flick,” he says. Audiences flock to movies like My Bloody Valentine and The Final Destination knowing they’ll get a good scare—or two. But Polowy says the public’s reaction to the “Body” promos “was less than favorable.”

The film’s failure could also be connected to too much Fox too soon. The starlet has only been on the scene for a few years, but she’s already become a tabloid mainstay.

“Fox is everywhere these days, and while she consistently makes for an entertaining interview, she's beyond overexposed,” he says of the “love her” or “hate her” star. “That can spell trouble for celebrities trying to sell a film. Just ask Lindsay Lohan.”

In the late 1970s, Carrie Fisher went from virtual unknown to Princess Leia, the feisty heroine of the Star Wars” franchise. But her follow-up film projects, including Under the Rainbow, didn’t make her a breakout star.

Spider-Man ’s squeeze Kristen Dunst has also struggled to find her niche away from the web slinger. Her list of post-Spidey disappointments include Elizabethtown, Mona Lisa Smile and Wimbledon.

She’ll be back in Spider-Man 4, but after three huge comic book hits it’s unlikely her fortunes will rebound any time soon.

One young actress who hasn’t even attempted to maximize her franchise fame is Emma Watson. The co-star of the insanely popular Harry Potter features has stuck, more or less, to her Hermione character.

She’s only done one outside theatrical project since the Potter series began, a vocal appearance in The Tale of Desperaux.

Maybe she's waiting for the final Potter film to hit theaters before starting out on her own, free of franchise strings.