close
This weekend, Sorority Row will try to carve out its own niche in the world of fright flicks.

The Next Horror Franchise? 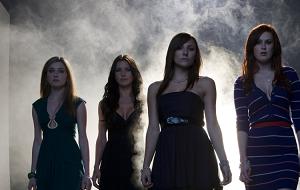 Freddy, Michael, Jigsaw and Jason are entrenched in horror movie lore. Can the hooded killer stalking co-eds in the new movie Sorority Row be far behind?

This weekend’s box office tally may provide some answers.

Row, which features a faceless killer stalking those whose mean-spirited prank led to a student’s death, is the latest film bucking to become the next horror franchise.

And that’s hardly a small matter. Films like A Nightmare on Elm Street, Halloween, Friday the 13th and Scream all launched a stream of horror sequels.

But not all horror franchises live long and prosper. While The Final Destination is out performing all expectations, the Rob Zombie horror sequel Halloween II is moving in the opposite direction.

Why the disparity? Could it be that Destination features a younger, prettier cast of characters—most of whom don’t live long enough to see the film’s credits roll? Or are horror fans bored of the Jason/Michael template and prefer the wild machinations ladled out in Destination and the still-profitable Saw features?

Sorority Row isn’t being screened for critics, hardly novel given that most studios steer their horror films clear of stuffy critics. But the film does offer a brisk trailer, a cast full of recognizable names—Rumer Willis, Audrina Patridge and Carrie Fisher among them—and a plot that speaks to the guilty teen mind in all of us.

John Wildman, head of press and public relations for AFI, says horror film fans are desperate for a film to fill the current monster icon void.

Many of the current monsters have been killing innocents for more than 20 years already, Wildman says. The indie horror film Hatchet purposely tried to create such a character, “but I don’t think it quite caught,“ he says.

But early peeks at Sorority Row leave him unsure the next Jason is born. His initial hunch is that the film’s formula - pretty girls get slaughtered by a revenge seeking creature—seems like thin gruel for those weaned on Freddy Krueger’s imaginative kills.

“I don’t think it has real ambition for any kind of franchise potential,” he says. Then again, neither did the first Friday the 13th feature, which tried to mimick the surprise success of Halloween.

It doesn’t help that today’s horror junkies seem more complicated to please than during the slasher-happy 1980s.

“You’re dealing with audiences that are much more fickle when it comes to horror now,” he says, adding that having a horror “name” like Rob Zombie being attached to a project won‘t guarantee box office glory.

Wildman does think Row could play a part in the next horror wave—films that tap into a post-feminist spirit.

“Films that explore the feminine psyche have the potential for female characters to do terrible horrible things,” he says. “Post feminist horror films will have a real lasting legacy if somebody creates a character that legitimately frightens and intrigues and entertains people.”