close
Despite appearing in several successful films, Aaron Eckhart is not a household name. Will Love Happens change that? 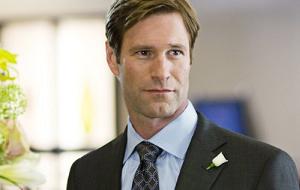 It’s the new Jennifer Aniston movie, plain and simple, even though Eckhart has the far meatier role.

Why the lack of love for Eckhart, who starred in last year’s smash The Dark Knight and has a resume that’s more distinguished than Aniston’s?

“’ The Dark Knight film pushed it along ... but he still wasn't one of the main leads. And Thank You For Smoking has a cult following, but that didn't have the phenomenal break through like, say, My Big Fat Greek Wedding had,” Rhoads says.

In Love Happens, Eckhart plays a Tony Robbins-type character still coming to grips with the loss of his wife three years ago. Aniston plays a flower shop owner who might be just the person to help him move on with his life.

Jenelle Riley, National Film and TV Editor of Back Stage, considers Eckhart “a character actor trapped in a leading man's body.” Riley says a possible modern comparison is to actor Cillian Murphy, another handsome actor who often pursues juicy supporting roles instead of playing the lead.

“He's drawn to more offbeat, edgy roles and when he does do a big hit—say, Erin Brockovich or The Dark Knight —he's never the main focus,” she says.

It’s one reason his work is often overlooked. That proved true with The Dark Knight, a film in which Heath Ledger’s Joker owned.

“Harvey Dent is really the only character with a solid arc, who undergoes dramatic changes, and the film works largely because of his performance,” she says.

The types of supporting parts Eckhart pursues could also be a reason for his current status.

“A-list stars don't play child molesters in films like Towelhead, one of his best performances to date,” says Riley, who suspects the actor isn‘t interested in that level of fame.

“He tried going the big blockbuster route before with films like The Core Paycheck, and I think experiences like that taught him to chase the material, not the ‘surefire hits,’” she says.

His ability to blend into his film’s storylines makes him a comfortable on-screen presence, but it also makes him less memorable than some of his peers.

“There are no paparazzi snapping photos outside his front door,” Dos Santos says.

Aniston has cemented her status as Hollywood’s rom-com gal, which gives Love Happens its marketing juice.

“Moviegoers will always remember this as another Jennifer Aniston movie costarring that guy who is cute but we can't quite remember his name,” Dos Santos says.