close
It's Complicated, the new romantic comedy from Nancy Meyers, is a project that may help turn the studio's fortunes.

A New Day at Universal 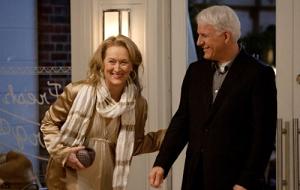 After one of their worst years ever, Universal’s Ron Meyer has shaken up the studio in hopes of righting what lately has seemed like a sinking ship. A string of expensive movies with lackluster box office, think Duplicity and Land of the Lost, have added to a slow decline of the studio’s output and forced recent changes at the top.

Current marketing head Adam Fogelson was promoted to Chairman and Donna Langley, the president of production since 2005, to co-chairman, while Rick Finkelstein, a vice chairman and COO of Universal Pictures for three years, will advise them. Joining Universal in 2001, Langley will continue to oversee production and will also be responsible for Focus Features and Working Title Films.

Being replaced are studio heads Marc Shmuger and David Linde, although it must be noted that two of Universals most profitable years came under their reign. Is the move short-sided? Maybe. Should the bad year be chalked up to the normal cycles of business? Maybe. It’s hard to argue that the most savvy studio executive could have known that a film like Tony Gilroy's Duplicity could tank. The film garnered some good reviews and it boasted a strong cast, but the Michael Clayton writer/director couldn't make lightning strike twice. State of Play, Brüno, Drag Me to Hell, Public Enemies and Funny People all failed to live up to expectations for Universal this year. Whether the new leadership team can right the studio and change its direction remains to be seen, since when it all comes down to the bottom line it seems a toss up as to who has the better nose for what works in this marketplace.

Universal's latest dud came in the form of Love Happens, the Jennifer Aniston/Aaron Eckhart vehicle that failed to capitalize on the recent popularity of both actors. The film has grossed only $18.8 million domestically since opening in September.

Opening Friday is Couples Retreat, re-teaming Vince Vaughn and Favreau, who wrote the screenplay and both star in the movie. Advance word on Retreat is not exactly glowing. Directed by Peter Billingsley, the film features a strong supporting cast, including Jason Bateman and Kristen Bell, so it could appeal to fans of Vaughn and Favreau who will expect it to be their brand of funny. Either Universal has high hopes or is desperate, but it’s kind of odd for a studio that’s supposed to be hurting to fly press out to Bora Bora, where the film was shot, for the junket.

Ending October is Cirque du Freak: The Vampire’s Assistant, starring John C. Reilly and Willem Dafoe. Directed by Paul Weitz ( About A Boy ) who co-wrote the script with Brian Helgeland, the film is based on the second book in the young-adult fantasy series by Darren Shan. A spooky thriller titled The Fourth Kind, starring Milla Jovovich, comes out on November 6, but it will be forced to face off with another thriller in the form of The Box, a Cameron Diaz vehicle. Described as a documentary reenactment of actual events related to alien abductions of a fairly large number of the citizens of Nome, Alaska, Fourth Kind could tap into the audience that's currently making Paranormal Activity a runaway hit for Paramount.

While Cirque du Freak and Fourth Kind are far from sure things, the studio has got to be banking on It’s Complicated, the latest adult romantic drama from writer/director Nancy Meyers, ( Something’s Gotta Give, What Women Want ) which hits the screens on Christmas Day. Meryl Streep, whose career just keeps on giving and giving, plays a woman who’s having an affair with her married ex-husband (Alec Baldwin), while being wooed by Steve Martin, an architect overseeing the remodeling of her kitchen. Meyers usually delivers solid adult fare, and there's no reason to expect that It's Complicated won't be a hit.

February 2010 brings the release of the long-awaited Wolfman, starring Benicio Del Toro and Emily Blunt. A remake of the 1941 horror classic, the film is directed by Joe Johnston and has generated a lot of buzz and a change in release date several times. Universal can certainly hope its opening on February 12 will be worth the wait, even though Valentine's Day, the new ensemble comedy from Garry Marshall, is sure to dominate a weekend that is full of moviegoing couples.