close
Writer/director Troy Duffy has finally put together a follow-up project to his cult hit, The Boondock Saints. 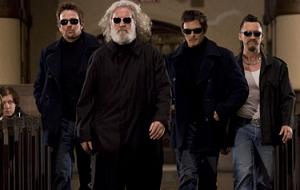 It's rare that a filmmaker already has enough controversy under his belt after filming a single movie to fill several "E! True Hollywood Stories", but writer/director Troy Duffy is that man.

Ten years ago, Duffy's film The Boondock Saints, was limping into five theaters for a one-week engagement, a pale shadow of the release Miramax might have afforded him had he managed to stay with the studio. The 28-year-old bartender originally brokered a deal with studio chief Harvey Weinstein to not only buy Duffy's screenplay and let him direct, but also gave Duffy's band The Brood (later renamed The Boondock Saints) money to record an album and even bought the bar where Duffy worked, splitting ownership right down the middle. Unfortunately, Duffy's reportedly volatile attitude -- as seen in the independent documentary Overnight —caused the equally temperamental Weinstein to put the film in turnaround and cancel the album deal. Eventually, Duffy struck a new deal with producer Elie Samaha for far less money and managed to get the violent action movie made, only to earn a dismal $25,812 from those five screens (against its $7 million budget) in the wake of the Columbine massacre.

Over the course of the decade since the film's first extremely limited engagement, The Boondock Saints was nabbed as a Blockbuster exclusive rental title in what turned out to be the first step on the road to cult movie status. Today, the movie has 72,735 user ratings on the Internet Movie Database (more than, say, Sunset Boulevard or Lawrence of Arabia ), and fans have filled the theaters for several national "event" screening of the director's cut held digitally by NCM Fathom. This weekend, after several false starts and years of rumors, the now 38-year-old Duffy is back with The Boondock Saints II: All Saints Day, reuniting original stars Norman Reedus, Sean Patrick Flanery and Billy Connolly as the title characters, and the big question is: will the first film's devoted fanbase actually translate into legitimate business?

Scanning the boards at BoondockFans.com, what from the outside might appear to be a bustling community feels more like a ghost town. On the very first page in the series' discussion forum (where topics about the new film would theoretically be found), there are threads that haven't been bumped since August, while a "sticky" thread at the top titled "Latest Update From Troy" contains a YouTube video uploaded in 2006 and the last post is from December 2008. The movie's official site at BoondockSaints.com doesn't seem much better, prominently displaying an ad for the 2-disc DVD of the film that 20th Century Fox put out in May 2006 (as opposed to the 2009 Blu-Ray edition), with nary a word about the new film on the main page (a few cursory references are hidden away under the "History" tab in the "About the Movie" section). It's possible Fox runs the site and doesn't want to support a competing studio's film (Sony will be releasing the Stage6-produced sequel on DVD), but it still seems a little strange.

Meanwhile, over at the film's official YouTube channel (www.youtube.com/user/realboondocksaints), view counts rise and fall. A video documenting Day 1 of the Saints II shoot boasts 75,279 views, but the last-day video has less than half that (23,660), and the final post-production video only manages a measly 6,125 views. Duffy seems fairly congenial in these videos, no doubt hoping that enough online presence will help to clear the air left by Overnight (which Duffy first claimed he'd never see but recently begun trashing in interviews with Entertainment Weekly and Slashfilm.com, calling it "boring" and labeling it a "smear campaign"), but there's still an air of edginess about him, as if he's anxiously waiting for the other shoe to drop.

This weekend, the sequel opens at 68 theaters nationwide, a step up from 5 but far from the wide release fans might be hoping for. In response, Stage6 has put up a "Demand It!" page over at Eventful, no doubt looking to replicate even a tiny fraction of the success Paranormal Activity has managed to whip up in the last two months. The 14,452 "Demand It!" votes the film has as of this writing don't even begin to compare to the one million demands Paramount asked for—and swiftly received—before releasing Activity nationwide, which toppled the long-standing Saw series at the box office last weekend. On one hand, it doesn't seem like a rosy outlook, but on the other, it's impressive that despite his rocky reputation, Duffy managed to get both The Boondock Saints and its sequel into theaters anyway. Today, it looks like Troy Duffy may be in for another uphill battle, but maybe, just maybe, that's where he performs best.