close
Anna Kendrick more than holds her own in Up in the Air, the new film from director Jason Reitman. 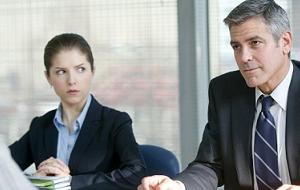 After a nervous audition, Anna Kendrick thought she blew her shot to co-star with George Clooney in director Jason Reitman's corporate culture comedy, Up in the Air. Not so.

"The great irony is I wrote the part for her," Reitman tells Kendrick, as they sit with fellow co-star Jason Bateman. "I watched you in Rocket Science and I saw one of the great performances of your generation. I didn't tell you because I didn't want you to be nervous." Bateman breaks into a wide grin while Kendrick turns beet red at the news.

"Sometimes you know when something goes well, and you known when it does not," she stammers. "Plus, you were kind of mean to me."

But Reitman's gushing praise lights up the 24-year-old actress and gets Bateman laughing. "I would have told her," Bateman stage-whispers to Reitman. "An actor wants to come into an audition with confidence."

Up in the Air, out this November from Paramount Pictures, is a bittersweet comedy that stars Clooney as Ryan Bingham, a career transition counselor or "hatchet man" hired by downsizing companies to fire their unsuspecting workers.

Bingham lives to travel and is obsessed with airport shops, preferred members' lounges, business hotels and his impending status of hitting the ten million mile frequent flyer club. Jason Bateman, who also worked with Reitman on the critical hit and cultural phenomenon Juno, plays Bingham's matter-of-fact boss, while Kendrick is an upstart hire who proposes video conferences to end the non-stop travel Clooney adores. On a cross-country trip, Clooney sets out to show his young associate that in the business of firing people, it's best to do the dirty work in person.

It's a comedy in perfect sync with the downsizing of corporate America—after all, everybody knows somebody who's recently lost a job. Reitman parries that his third feature film, following Thank You for Smoking and the multi-Oscar nominated Juno, is about more than politics.

"Why this film is relevant has nothing to do with job loss or the economy. We live in a moment where people are more disconnected than ever before, but we feel like we're connected because of Twitter and Facebook. We feel we're part of a giant community, but we don't look anyone in the eye. You get off an airport and you feel like you're at home, but your not," says Reitman. "The fact that our main character fires people for a living is coincidence that helps the details in the film."

Enthusiastic showings at the fall festivals have made Up in the Air a high-profile release for Paramount, who has launched awards campaigns for everyone involved.

Kendrick is no stranger to awards: she earned a Tony nomination for her performance in High Society on Broadway. She's also worked alongside Jeremy Irons onstage in A Little Night Music. Up next is a supporting role in The Twilight Saga: New Moon.

Says Reitman to his young actress, "You are as brilliant as you are beautiful. You have an enormous career ahead of you. Be patient and enjoy it. In you, I see a young Jodie Foster; a young Meryl Streep."

Adds Bateman, "You need to buy a nice big gown for next spring."