close
We caught up with documentary filmmaker Kris Belman to discuss his LeBron James film.

Belman Talks 'More Than A Game' 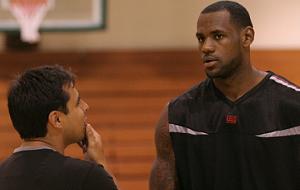 Kris Belman was a college film student in Los Angeles when he decided for a 10-minute class project he would film a high school basketball team from his hometown of Akron, Ohio. That team was the St. Vincent's squad led by LeBron James—the entering senior who had just had his face slapped on the cover of Sports Illustrated —and Belman soon realized that he should keep his camera rolling. Over the team's last tumultuous year, James made headlines when his mother bought a Hummer against his future NBA earnings and lost him his eligibility. But Belman's finished product, More Than A Game, isn't a Portrait of the Athlete as a Young Man—as he explains to B OXOFFICE, this is a story about friendship, teamwork and sweat.

This film is about basketball, but it's really about much more.

From day one, the themes that drew me to the project were the friendships. I read that four of these guys had played together even before entering St. Vincent's/St. Mary's. Growing up in Akron myself, and knowing where these guys came from, that was not an obvious school for them by any means. Four black inner city kids choosing a pretty much all-white private school—it's not an easy decision. I was immediately drawn to the project because of the fact that these guys decided to go to high school together. As I spent more and more time with them, I realized that it's really Coach Dru's story more than anybody's. It's about dreams and the foundation that you need to achieve those dreams: friendships, surrogate families, all those things. It's true: I never wanted to make a basketball film. I wanted to use basketball to uncover all these subtext.

I hear you held onto the footage until you met a producer who understood that your tapes weren't meant to be just a highlight reel of LeBron James in high school.

After working on it for five years by myself, I realized I needed some help to really get it done, to bring in original music, and a visual effects artist and a professional editor. I knew that I couldn't just do it myself anymore. I had rough edits and an outline—i knew exactly what I needed—and when I took meetings with financiers and other producers, none of them were interested in that story. They were all interested in the LeBron angle, and they either wanted to hire me to direct the LeBron footage, or just buy the material outright. That was just not possible—I only got access to the team because of the friendship story. That's what I told the coach and the guys, and that's why they let me into their lives. That stretch was a low two years for this project. I wasn't sure if I was going to be able to finish the film the way I wanted to. But then I met Harvey Mason Jr., who ended up financing and finishing the film. He got the story that I wanted to tell. More importantly, he wasn't in film; he came from music. He just wanted to come in and help me make my vision. I'll always appreciate that.

During those years when you weren't sure this film would ever be made, how did you stay strong and committed?

The story of the boys. I felt like what they did as friends and players could inspire a lot of people worldwide. It's the universal theme of dreams and advancement—I drew from that because I felt the story had to be told no matter what. I was bursting at the seams to tell it, and I felt like it I didn't, no one ever would. LeBron will always be in the news; we'll always hear about him. But no one was going to tell the other guys' stories, and I felt like that couldn't happen. I'd call Couch Dru and fill him in. Things weren't going well, I was kind of down. He'd always tell me, 'Hey, Kris, you've gotten this far and you haven't sold out—just stay the course and it'll happen eventually.'

Absolutely. Not in basketball—if you've ever seen me play, you know that for sure. But Coach Dru is more a life coach than a basketball coach, in a lot of ways. I was very lucky—he's very much a coach to me, and I drew a lot of inspiration from him.

You were a junior in college when you started the film—in a way, it's also an inspirational story for young filmmakers.

That's one of the aspects of the story that I hope can inspire young artists. As things went on, after the film was finished we were able to pair up with Nike and Lionsgate, our distributor. But this was very much an independent film in every sense of the word. It started off as a college project, and I really do hope that other filmmakers and people dedicated to their art can also stay true to what they want to do and get it done. Especially in this day and age with digital cameras, you don't need a big budget to go out and do it on your own.

While this is a film about teamwork, how much harder would it have been to get it noticed without that single breakout star?

If you take out any one of those guys, it doesn't work. If you took Willie out of the story and of the life, then LeBron's last year, he's not going to be MVP. If you took LeBron out, Willie's not going to be getting his masters degree right now. It's impossible to take any of them out. They're such big pieces of each other's life. It really is a surrogate family. I feel like the film has a chance to break some stereotypes about male bonding—especially how athletes view each other and interact. LeBron being who he is gives it visibility, and you learn more about LeBron by learning about these other characters that were an integral part of his foundation—when you hear about who Sian and Romeo are.

Dru has that quote: “We were like a rock band. He was just the lead singer.”

Especially that junior year, all those boys were living it up! Getting caught up in that whirlwind of a rock tour. It really was that way. All the boys were taking pictures and signing autographs. For everyone associated with that entire experience, it was such a crazy, crazy time—especially for 16 and 17 year old kids. It was unbelievable. LeBron was obviously getting more attention because he was the cover boy, but all the boys were enjoying that pace of success.

The film has something to say about media attention: it wants people to succeed and fail. What was it like at ground level?

It was crazy just being in the middle of it. As they got bigger and bigger, the fame around them started to unwind. I felt this pressure because I had this unbelievable access. ESPN and FOX camera guys were being held away from the locker room by security guards—the team had to hire security guards because things were so crazy. And these security guards were grabbing me and pulling me in because I was an unofficial member of the team. These professionals were looking at me like, “Why does this kid get to be there?” Then they started to get that sense that people were starting to get sick of them. They were on the news a little too much. The news story switched from these amazing basketball players on this amazing team to, “Why is there so much hype on these team? Why are we talking about these guys so much?” There were reports being done on the fact that they themselves were reporting on them. That resentment started to wear on the guys. They're in high school and people in their home town are rooting against them—looking for them to lose. I think they just looked to each other and said we'll get through it together. It does show how the media can work: building someone up and then seeing how to report conflict.

Do you think if they had won that championship game junior year and not had a chance to learn that last lesson, this would be a different film?

It'd be a different film and they'd all be different players. I've heard LeBron say he woudln't be who he is in the NBA if they hadn't lost that game. They really needed to learn that lesson. They needed to see what it was like to fail—and to fail because of themselves. They grew up more in that one game then they did their whole season. It was a life lesson. Coach Dru says in the film, “Use basketball. Don't let basketball use you.” That junior year, basketball used them. But they were smart enough to use that lesson to better themselves and it really paid off.

I heard the next project you're working on is a true story about an athlete trying to break a world record he'd given up on when he was younger.

It's something I'm investigating. I'm not sure if I'm going to do that right away, or hold off and do it down the road. But it's a project about a athlete using a life lesson to go back and get something he let slip through his fingers.