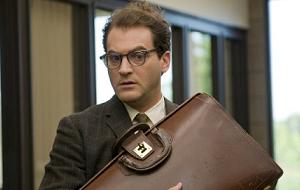 While Joel and Ethan Coen's new film A Serious Man is garnering critical raves, without a star-studded cast it seems destined to be a film that is praised by fans but not fully appreciated by mainstream audiences. The Coens have had their share of hits— Fargo, No Country For Old Men, and the cult monster that The Big Lebowski has become—but yet their idiosyncratic style has spawned more than a few lesser-known works. Still, even a commercially inaccessible Coen Brothers movie is still a Coen Brothers movie.

A festival win can translate into awards buzz, which can be spun into box-office gold for both the film in question and future projects by the same team, but Barton Fink 's Palme D'or win and Oscar nominations wouldn't arrive until long after the Coens' previous project, a hard-boiled Prohibition-era gangster drama, had come and gone. Miller's Crossing marked the first of four Coen projects for John Turturro and the last of three for cinematographer (and future director) Barry Sonnenfeld before the pair formed a bond with Roger Deakins, who would go on to shoot every future Coen film (with the exception of Burn After Reading, due to a scheduling conflict). While the film is acclaimed today among Coen fans and critics, the $5.1 million box office—$8.6 million adjusted—remains a relevant sign of the film's cold reception by general audiences.

Co-written by horror maestro Sam Raimi (and co-starring his buddy Bruce Campbell in a supporting role), The Hudsucker Proxy may be the least-renowned Coen Brothers film of all. Starring Tim Robbins as an enthusiastic but slightly dim-witted mail clerk promoted to CEO in a secret scam designed to allow the the Hudsucker board (including mega-star Paul Newman) to buy up all of the company's falling stock, the film is visually stunning and packs plenty of Joel and Ethan's trademark comic dialogue. Whether audiences found it too slow, were put off by Jennifer Jason Leigh's non-stop chatter as a news reporter trying to get the inside scoop on Robbins' character, or agreed with Roger Ebert's contention that the visuals overwhelmed the movie ("Not even the slightest attempt is made to suggest that the film takes its own story seriously. Everything is style."), the film only grossed a meager $2.8 million, which, even adjusting for inflation, is the brothers' least-successful box-office take ever.

The Coens' 2001 film about a barber (Billy Bob Thornton) whose blackmail scheme quickly spins out of control is one of the best examples of the writing and directing team's skill at both comedy and drama, packing in pie-eating contests and UFO stories alongside murder and infidelity. Unfortunately, the film's decidedly leisurely pace, an (intentionally) low-key performance by Thornton that borders on monotonous, and, most likely, the fact that the film was in black-and-white scared audiences away. It's the only film the Coens have made in the last decade that failed to gross more than $10 million, falling just short at a $7.5 domestic tally—an even shorter difference when the tally is adjusted for inflation ($9.6 million). Still, every cloud has a silver lining: Deakins' beautiful cinematography nabbed a much-deserved Oscar nom.

Intolerable Cruelty is a paralyzing film: it's one of the duo's broadest, most accessible efforts, with massive star wattage from both George Clooney and Catherine Zeta-Jones, and it's more than a cut above most romantic comedies, with a generous helping of the Coens' unique comic sensibilities. Instead of the audience-bridging hit that Universal might have been hoping for, however, Intolerable Cruelty was a film that didn't seem to please anyone. Fans of the Coens claimed it was too soft, an overly goofy farce blemishing a long-standing record of sharp satire, and regular audiences didn't seem entirely interested in the film's left-of-center humor. Despite a seemingly healthy $35.1 million domestic take, the numbers fell far short of the $170.6 million domestic gross of Catherine Zeta-Jones' Chicago or even the $38.1 million opening weekend for Clooney's Ocean's Eleven.

Despite rising to fame in comedies during the 1980s, Tom Hanks turned towards dramas in the 90s, scoring Oscar wins for his work in Philadelphia and Forrest Gump. On paper, it probably looked like a sure thing to mark his live-action return to the genre by teaming with Joel and Ethan Coen, but The Ladykillers ended up being the first film that Hanks had starred in for a decade that was unable to break $100 million at the domestic box office. Like Intolerable Cruelty, the project, a remake of the Alec Guinness-starring Ealing comedy, was originally written by the Coens as a script for someone else to direct. In this case, that someone was their former cinematographer Sonnenfeld, but they ended up taking over when Sonnenfeld dropped out. Once again, there are some positives—Hanks has more than a handful of funny moments in what is, at the very least, an original performance, and the brothers get to share co-directing/producing credits for the first time—but their fans will no doubt be more than weary if Joel and Ethan find any projects they left behind coming back to them in the future.