close
We caught up with F. Gary Gray, the director behind Overture's successful new revenge thriller. 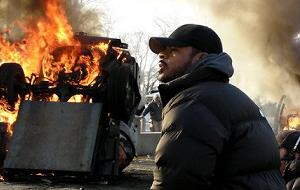 It was a good day for F. Gary Gray when the video he directed for the Ice Cube hit blew up on MTV and became canonized as one of the best music videos of all time—and it's been great ever since. Two years later, Gray collaborated with Ice Cube on his first feature, Friday, with Cube showing his support by wearing the exact same shirt he did for the iconic single. The $3.5 million sleeper earned its money back seven times over at the box office, and thrived on VHS and DVD. Hollywood took notice, and Gray's talents and thoughtfulness propelled him out of the niche urban market and into blockbuster fare. Just three years later, he was given a $50 million budget for The Negotiator —the highest amount ever for an African American director (surprisingly overdue). Gray's made films with Samuel L. Jackson and Kevin Spacey ( The Negotiator ), Edward Norton, Mark Walhberg and Charlize Theron ( The Italian Job ), and Vin Diesel ( A Man Apart ), but it's his latest that industry insiders are betting will really blow the roof off the multiplex. Law Abiding Citizen pits Gerard Butler against Jamie Foxx in a taut thriller about a victim, Butler's Clyde Shelton, who avenges himself on the city prosecutor who cut a deal with the criminals who destroyed his life. B OXOFFICE talks to Gray about how to build a blockbuster on shaky moral ground.

In Law Abiding Citizen, the distinction between the good guy and the bad guy are incredibly blurred.

I think that's what sets the movie apart from other movies in the genre. It's really unique in that there's no clear antagonist or protagonist. It keeps you on the edge of your seat. In one part of the movie, you're invested in one character, and then you're invested in the other. That's just how life is—sometimes it's not so black and white. And I think that's why the characters are really relatable. You have good days and bad days, and that complexity mirrors real life. You're forced to ask yourself that question: What would you do if you were victimized in the way that Clyde Shelton was victimized? That's what attracted me to the material. You see revenge movies often; that's a common theme. But very rarely do you get a chance to walk the fine line of, 'Who am I really rooting for?' Jamie Foxx and Gerard Butler turned in performances that really get that.

Shaping this theme into a movie, on a scene-by-scene basis, do you have to think differently about where the audience is emotionally?

You always think about what the audience is thinking when you're making choices. Ultimately, I think you have to focus first and foremost: how does this affect the story? Does this serve the progression of the story that I want to tell? What the audience thinks comes second. When I direct or develop each scene, I have a list of questions that I ask myself, and it does include how does the audience feel at this moment, just to make sure that each scene feels like it deserves to stay. Certain scenes are gratuitous.

What is your philosophy in shooting action? It seems to be splicing into two distinct styles: ultra fast and long and tense.

With this movie, it's all about tone and character. I allow the tone of the movie to dictate how I treat the action. With a movie like this, I was going for a retro neo-noir style—it doesn't require all the fast cutting. There's a lot of surprises in this movie and you don't see a lot of stuff coming. A lot of times in action films, there's action for the sake of action. But in a movie like this, it's all born out of how it progresses and how it affects the actors. It's not a situation where I'm telling this story that has a certain flow, and then I jam in a high-powered action sequence to keep everyone distracted. It's all interconnected.

Before a take, how do you get everyone aligned in that deliberate tone?

I try to establish the truth. Before rehearsal, we find out what that truth is. We know clearly what story we're telling. We know clearly the objectives of each character within the story and within each scene. All I do is make sure that the actors are serving the truth within that moment, and it kinda takes care of itself. Clearly, I manage it along the way, but we tend to stay in good shape. Sometimes you make adjustments along the way, but a lot of the homework is done in pre-production and rehearsals.

I remember the first time I saw your name. You were one of the first crop of directors to have MTV run your name in the corner of the screen.

Wow. You're going way back. I remember that—thank you. My life just flashed before my eyes; I remembered all the stuff that was going on back then.

In my head, I think of the people who were huge in music videos then as a graduating class, and you've all gone on to feature work: you, Spike Jonze, Mark Pellington...

What's the news on The Brazilian Job ?

I'm not really sure where Paramount is with that. They're developing a script right now, and I think when they come up with an idea, then that's when we'll get into serious talks about putting it on the screen. I think there's a way to go to get that going.

Who do you think is the next big hope for smart action films.? Bruce Willis has been carrying most of the weight on his shoulders for the last two decades—who are your bets for the next wave?

That's a really good question. I could tell you who I like to see in movies. Obviously, Johnny Depp is great—he's been around for a long time, but he always ends up making very fresh choices. I like Eric Bana, he's extremely talented. With the right role, he can give you a great character—and with the right director, add depth and variety in action pictures. There's very few guys out there who can pull it off. Clearly, Gerard and Jamie are doing a pretty damn good job. Those names keep me interested.

Jamie Foxx is almost old-fashioned because he's such a renaissance performer.

He's a quadruple threat. That guy's great at sports, music, comedy and acting. That's something you rarely see. You'd see it more in the past because people really studied their craft and were serious about the arts. Now, a lot of people depend on their looks and not much more. Jamie is a consummate professional and extremely talented guy—hopefully, this is the first of many movies I do with him, because I think he's going to go down as one of the great ones of the era.

And talk to me about working with Viola Davis—she's incredible.

It's like magic, man. She has a certain gravity and a certain power that she brings to a moment that very few actors can do. I know that seems cliché because we experienced that in the movie Doubt, when she did one scene with Meryl Streep and completely destroyed it. She's a powerhouse. I hired her on a Friday. She jumped on a plane on Tuesday and was in her wardrobe in the afternoon, came in, ripped her scene, and then jumped back on a plane. I gotta tell you, it was almost like a tornado, the destruction she left. We were all just standing there with our mouths open: me, Jamie, my producers. It's amazing to see her work. Actors with that level of talent make my job easier, and more than that, fun. I find myself enjoying watching that level of performance so much that I forget that I'm directing. I'm amazed how present she is, how powerful she is, how much life she brings to even the simplest words on the page.

You made the smart—and interesting—decision to shift the location from LA to Philadelphia.

Philadelphia is a character in the movie. I was going for that neo-noirish tone, and you'll see elements of that throughout the picture. There are amazing bridges and an amazing city hall—which I believe is one of the biggest city halls in America—with this historic architecture. All these little things that add up to a retro feel that really serves the mood and tone of the movie. I ran with that. I decided that that was the look and approach I wanted to achieve, and Philly was perfect for that.

And it's such a symbolic place, as well.

Of course! When you're dealing with the theme of justice, I don't think there's a better place on planet earth, let alone the United States, than Philadelphia. You know the history. It's symbolic in so many ways, and I'm glad you pointed that out. It's certainly there; I consciously took advantage of it when I made my location choices.

What do you want people to be talking about after they've seen the film?

First and foremost, it's really simple: I want people to walk away feeling thoroughly entertained. There are a lot of levels and a lot of layers in the film, and if you watch it once, twice, and get some of the little things that we were conscious of throwing in there to make it better than the average movie, or more engaging than a movie in this genre, then all the better.