close
Vigilante flicks such as Overture's Law Abiding Citizen seem to be making a genuine comeback. 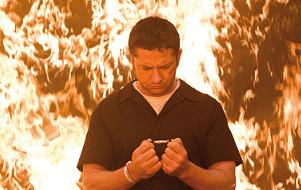 The movie stars Gerard Butler as a man whose wife and daughter are senselessly slaughtered by two thugs. Jamie Foxx plays the assistant District Attorney who hammers out a deal which sets one of the killers free after only a few years behind bars.

So Butler does what Charles Bronson and Clint Eastwood before him once did—he takes punishment into his own hands.

Citizen is one lean, mean movie machine. But is that a healthy way to spend a night at the movies, especially at a time when unemployment is sky high and the recession still has the country in its grip? Or is that precisely what moviegoers want as they ponder their 401K accounts and monthly bills?

“People are more angry these days than I’ve ever seen them before,” says Gilda Carle, an internationally-known psychotherapist, relationship educator, and management consultant.

Which means action packed films with provocative themes can be an appropriate way to vent.

“It’s far healthier to see movies and thereby work out their emotions on screen. Movies allow for discussion of the characters and problems with friends, probing the feelings and fears of the issues,” says Carle.

When people read headlines of politicians or other public officials getting away with despicable acts it stokes their sense that the system just isn’t working. That's precisely the theme at play in Citizen.

Moviegoers can do something destructive with their pent-up rage, like eat too much or act it out in some way, “or they can safely channel their emotions through exercise, writing, or vicariously identifying with movie characters,” adds Carle.

Psychotherapist Tina B. Tessina, a Southern California-based licensed psychotherapist, has a different take on it.

She thinks movie violence, be it in vigilante or some other form, reflects studios’ belief that it’s the best way to attract the male teen demographic while easily translating to other languages for overseas sales.

It isn’t a formula for success given the news of the day.

“I think audiences are staying away in droves, because most adults want to escape and to be entertained, not to be horrified and feel beaten up by a movie that's too loud, has too much violence, and is too upsetting,” she says.

Vigilante films aren’t always a slam dunk at the box office, no matter the country’s mood.

Recent efforts such as The Brave One starring Jodie Foster and Death Sentence featuring Kevin Bacon both performed poorly at the box office.

But even if Law Abiding Citizen proves to be a poor match for the nation’s collective mood, more vigilante films will surely follow. Sylvester Stallone is prepping a remake of Death Wish, arguably the grandfather of the vigilante film movement.