close
We sat down with Michael Jai White, the star of Black Dynamite. 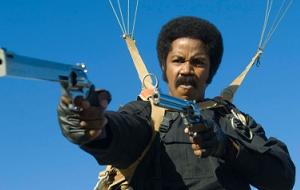 As Black Dynamite, Michael Jai White can handle three women at once. As himself, the actor/stuntman/writer/martial artist/teacher/producer has proven he can take on much more. His hilarious blaxplotation homage, Black Dynamite, is his first chance to show off all of his talents at once—and if audiences clue in to his quirky action comedy, more opportunities are just a high kick around the corner. White talks to B OXOFFICE about why Hollywood still doesn't understand action flicks, three decades after blaxploitation went big and two decades since its last homegrown American hero. (Could White be next?)


This all started because you took candid joke snapshots of yourself in costume?

Well, I made up my mind that I wanted to do this movie. And it's hard to sell an intangible, so I wanted to shoot some pictures of me as the character. I rented a costume and I had this picture with the gun and nunchucks—it explains kind of the tone of the movie. If you look at the picture it looks pretty serious. But it's pretty ridiculous to have a gun and a pair of nunchucks, you know what I mean? So from that point on, Scott [Sanders, the director] and I just dug down and moved ahead to get the movie made, got the financing and everything else.

Do you think Blaxploitation films still exist today? Have they mutated into a different form?

I'd say no. It would only be if all of a sudden, Hollywood had this mandate to follow the Tyler Perry mode and shortchange the movie-making process by making a slew of these movies.

Yeah, to try to cash in on what Tyler Perry has done. Tyler Perry-sploitation. That's really what it would be to make another Blaxploitation. That Blaxploitation movement only came after Hollywood realized that there was a legitimate audience in the African American market—and that they would frequent these movies over and over that didn't cost very much to make and didn't cost very much to publicize. So they then exploited that by spending very little time on the movies, and that gave birth to the term Blaxploitation. But movies like The Mack and Shaft ? Those were not exploitative in any way. I mean, these were absolutely well-done movies—they became exploitative when they started doing any old movie.

How did you make the decision to play this completely straight and deadpan, instead of making it a winking satire closer to Undercover Brother ?

Because I genuinely love the time period and I genuinely love the movies. It meant a lot to me even as a youngster to see people who looked like me in heroic fashion, you know? That was a first time for a lot of people, because black people were only depicted as servants and pickaninnies and maids and all that stuff—just these buffoonish type of characters. Up until Mario Van Peebles made Sweet Sweetback's Baadasssss Song.

Absolutely. That was a very significant time. You can argue that nowadays you don't really have that many Alpha Male role models in the marketplace. Back then we had handsome leading actors, handsome strong leading actors who were smart, who got the ladies, kicked ass—everything. Now, you basically have one or two guys in movies doing that. And you kind of ask, “Well, how far have we come really, when back in the '70s we had probably twenty or so.”

One of the things I thought was interesting about this film is it reminded me of that real divide that came up in the late '80s—action films started to be mainly guns, unless they're set in Asia. This film showed off the great athleticism of stunt choreography.

The mano-a-mano type of thing.

Yeah, there's something to be said about that.

I loved the movies of the '70s. I think it reflected the fact that men were going through things; there was a rite of passage back then. Men like the Charles Bronsons, the Jim Browns, the Clint Eastwoods—these were guys who were real guys. And they were real guys playing these movies. Now it's this kind of fabricated heroics. They try out these rugged heroes, who are really kind of pretty actors—this corporate way that they've tried to make these movies now. There's a purity of action films that I wanted to restore.

Since Bruce Willis popped up in the '80s, we haven't really had this big contender that they put blockbuster money behind.

Exactly. Ever since Bruce Willis, all of our heroes, Alpha Male role models in movies, have been imports. You've got Hugh Jackman, Russell Crowe, Eric Bana.

Yeah, Daniel Craig. Everybody's from Europe. You know? It's kind of reflective of our watered-down society. It's interesting if you take a look at it.

Now that I'm thinking of the Bond movies, as a stunt person, are you excited that parkour is getting more interest? There's some moves here that seem sort of parkour-based?

I'm always applauding the movies where someone is actually doing—especially with action movies. Sometimes I think Hollywood, they get so obsessed with the way they cast things. Dramas and comedies, of course—there's such a surplus of those—it's very star-driven. You have to have somebody ; they put that into their formula machine. But with action movies, there's always been a mandate for the regular, blue-collar person. That this person be believable. And I applaud the fact that you've got movies like 300. Nobody was a star. But they were believable. Daniel Craig—people ho-hummed him—but then he looked so believable. In that scene where he walks out of the water, that's what guys want to look like.

They turned that into a popsicle in England. Women voted, and Craig in a Speedo is now a popsicle that they're selling everywhere.

And you have Taken. It's not just this Hollywood thing. With action movies, the public demands that people be real. Especially with martial arts. It's like, you're following in a line of Bruce Lee, Chuck Norris, Jackie Chan, Jet Lee, Van Damme, Seagal. Then you're going to try to throw Channing Tatum down somebody's throat?

And then you fake it with editing and everyone can tell.

Yeah, people can tell. People want to live vicariously through certain people. It's really about that, and I think action is the one genre that I don't think Hollywood understands. Even though, over and over, it's proven with Daniel Craig, with Jason Statham, with these people who are believable. I love action movies. And it's beyond color. I mean, Bruce Lee, an Asian guy, is one of the greatest action heroes—

So as people want to live vicariously, they want to be able to perform something that other people can't do. With these characters and my company, Goliath Entertainment, I want to fill that chasm in the action movie market. Do these movies that don't cost very much that have this worldwide appeal. I've been very happy that my movies like Blood and Bone and Black Dynamite have been so well received overseas, because it's one of those things that unites all of us. And that's what I think it should be about.

Were you almost having to draw on your martial arts training to keep your composure during all of those deadpan scenes? Nobody was breaking character and it was hysterical—how on Earth did you not bust up laughing?

It's funny but my acting career and the martial arts thing—they were just these separate things. I've made a living as an actor and I've made a living as a martial artist, both separately. But I didn't want to do martial arts movies until I was established as a legitimate actor. I only started doing that stuff lately over the last couple years. But it's one of those things where I think being a martial artist permeates a lot of things in my life. I just do things to the best of my ability—I enjoy just looking at life that way.

Did you see Tyson, the documentary that came out last year?

What's your take, having been in his shoes yourself in your own film [ Tyson, 1995]?

There was a lot I was privy to that a lot of people weren't. So a lot of that stuff I already knew. It was great seeing, I think, the growth that Mike has had. That's heartwarming.

You were also a middle school teacher, and I couldn't help wondering between that and filmmaking, which is more exhausting at the end of the day?

When I was a teacher, I felt that. That was something. I should've gotten the money I get now for that. It's something that I felt that I was very good at, and that I was very proud to say I did. Even nowadays, somebody has to really pull it out of me for me to admit that I'm an actor. But it wasn't that way when I spoke as a teacher. I'm very proud of being a former teacher; I still am connected with that because I do a lot of motivational speaking around the country. I enjoy what I do, acting. But I still know that I'm a grown man playing make-believe. It's a fun job—it's a great job—but I think unless I did something positive with it, it doesn't make much sense. I still haven't really left teaching behind. But my job acting makes it so that I can reach a lot more kids.

What are your favorite guilty pleasure movies?

My favorite—the movie I probably could quote—is Monty Python and the Holy Grail. I think that's the funniest movie ever. But I really enjoy this whole Blaxploitation thing. It was such a funny period. The moral consciousness was of this pimp or player or hustler, which was not very much different than movies like Butch Cassidy and the Sundance Kid —the people who were the outlaws were made into heroes. It's just really interesting to look back at that now—and those movies are just so hilarious to watch, all the garishness and the absurdity.

Tell me some stories from being on the set. It seemed like you were working with your best friends.

Absolutely, a lot of people were my best friends; my best friends were on that. We had so much fun. I would work individually with the actors and make sure that everybody gets the tone right, but every day going to work was a guilty pleasure.

Did you have a favorite outfit?

I think my white outfit, the outfit that you first see Black Dynamite in. It was one of those things where Ruth Carter [costume designer] whipped that together at the last minute, and it was just outstanding. Even though I burst out of it a few times. But that was a great outfit. I have another outfit that has a lot of personal significance, the blue outfit that I wear in the poster. That represented the first day I seriously tried to get Black Dynamite off the ground. I rented that same outfit from a rental house, a costume place, and took pictures in that same outfit. For that to be the very outfit that I'm wearing in the poster? And the very outfit I complete the movie in? It feels really good.