close
Sony is trying an unprecedented television blitz for a new 2012 commercial that is airing tonight. 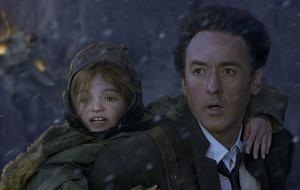 You won’t be able to avoid the film today.

At between 10:50 p.m. and 11 p.m. on the coasts—with varying times throughout the rest of the country—audiences will see a two-minute scene from the upcoming Sony release on a variety of media outlets.

The studio says the marketing blitz will be the largest broadcast, cable, online and mobile media preview ever attached to a movie promotion. The "roadblock" style event is expected to reach nearly 110 million television viewers, more than a Super Bowl viewing audience, according to Sony.

The action-heavy clip will air on the major broadcast networks, 89 cable networks, local stations in the top 70 markets, and Spanish-language networks across the U.S. It's all on behalf of a film that doesn't open until November 13.

But will the marketing strategy pay off?

“How often do people write about, and talk about, a commercial?“ Elzer asks. “Only when you do it in a way that generates interest and excitement.”

“Television is still the most effective way to reach your audience,” he says, adding a “substantial” interactive component to the marketing blitz remains a key part of the 2012 strategy.

Robert Marich, author of “Marketing to Moviegoers: Second Edition,” says the Sony ad buy is a “pretty big” investment in the movie in question.

“If the test screenings weren’t so good, they wouldn’t put so much money into it ... They think they’ve got the goods and they’re gonna show the audience,” Marich says.

“If the movie goers are motivated they’ll have to wait six weeks to buy tickets,” adds Marich. But that’s the old conventional thinking kicking in.

Consider all the coin dropped on Super Bowl movie advertisement spots through recent years, even those films remain months away from hitting theaters, he says.

Last January, a 3D spot for “Monsters vs. Aliens” aired during the Super Bowl, and the film went on to do gangbusters box office months later.

The only downside, Marich says, is if the buzz peaks too early, but given the holiday movie season isn’t heavy on sugar-coated blockbusters, that’s unlikely.

“They are going for the holiday crowd with a genre that is glossy action mass appeal. That's somewhat in light supply,” he says.

For Elzer, the stakes couldn’t be any more clear.

“The ultimate threshold is not only opening the film but that the film does well throughout the life of its run,” Elzer says.