close
Lars von Trier's controversial new film is finally being unleashed on the paying public. Are they ready for it?

The Impact of 'Antichrist' 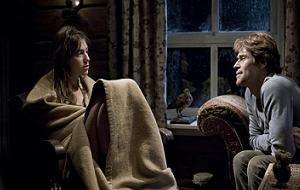 A bit more than halfway through Lars von Trier's new film Antichrist, a fox, chewing on its own innards, turns to the character known only as He, played by Willem Dafoe, and proclaims "Chaos reigns." The moment, also in the movie's trailer, was a minor sensation on the internet, resulting in several mash-up trailers on YouTube (edited together with footage from Wes Anderson's Fantastic Mr. Fox ) and prompting the Austin-based Fantastic Fest to produce a T-shirt with the quote on it for fans to buy at this year's festival. Finally, Variety ran a piece suggesting that "Chaos Reigns." was the new "I Drink Your Milkshake!" (a popular line from 2007's Oscar-winner There Will Be Blood ).

However, even There Will Be Blood 's ruthless early-1900's oilman protagonist, religious themes and solemn tone probably seemed like ingredients for a pre-packaged blockbuster in comparison to Antichrist, which features several counts of graphic sex and on-screen genital mutilation, not to mention loads of surreal, painstakingly overwrought images just like that talking fox, wrenched from the id of one of cinema's most avant-garde auteurs.

IFC and von Trier passed on having the film rated by the Motion Picture Association of America, but as word of the film's graphic nature began to spread, concerns were raised that kids might try to find a way to see it. Christian film critic Ted Baehr, who runs the website Movieguide.org, is petitioning the MPAA to give the film an NC-17 rating, which prevents anyone under 18 from seeing the film, even with an adult. Historically, an NC-17 has also been a major roadblock in a film's boxoffice success, since most theaters won't run films with the rating.

"The fact of the matter is that there's a lot of research out there that shows that kids become the primary audience for anything that's edgy or pushing the envelope," Baehr tells B OXOFFICE. "There was that movie Hounddog, which several critics walked out of at Sundance, because it was so repulsive, and now it's on Showtime."

Primarily, Baehr is worried about the effect the film could have on young viewers. "Different children have different susceptibility. I don't smoke, I don't care if other people smoke, but there are children who are susceptible. 93% of the people who see the movie are going to find it abhorrent, and maybe 7% of the people are going to find it appealing, and that's where you get those Ted Bundy cases. People start to say 'I don't care, because it doesn't affect me', but maybe it affects someone else, and the people who are going to be affected by the movie are at that age."

In the past, similar petitions have often moved to block or ban a film's release, but Baehr doesn't sound concerned about the film itself, just the potential that younger viewers might see it. "Adults are too busy to be drawn in by this kind of stuff!" he laughs. "Anyone wants to see it over 18, 19, 20, that's their prerogative, you can't stop them."

Elizabeth Kaltman, a spokesperson for the MPAA, responds, "The rating system has always been voluntary, so we would never impose a rating upon a movie. Antichrist wasn't submitted to the MPAA by the distributor, which is entirely their decision." When asked if the film's graphic nature would even qualify for an NC-17, she seemed a bit taken aback. "I've never been asked that question before ... the best thing I can tell you is that if a film is patently adult, it will get an NC-17 certification." But Baehr still places the ball in their court. "[Not rating the movie] places the burden on parents, parents have to make the argument that 'this isn't good for my kids' from scratch, yet the best place to stop it is at the MPAA. Really, if they don't want to make these kinds of decisions, they should get out of the job."

This weekend, the film opens in six theaters, all of which cater more to the arthouse audience than the average filmgoer. At The Music Box in Chicago, marketing associate and exhibitor relations employee Austin Vitt is confident informed viewers will turn out. "Most of our audience is swayed by what they read, and several papers in Chicago have given the film a good review. I'd say generally our guests are aware of the films, and we're not worried that people will walk in not knowing what to expect," he says. "I think they know that film by an auteur like von Trier is risk they took, and many people who walk out will have gone in prepared for that possibility rather than just looking for a good time on a Friday night. But obviously, our goal is that people have a good experience with our theater, and if anyone is offended, we'll probably give them passes." In response to Baehr's concerns about minors getting in, Chris Lewallen of the Nuart in Los Angeles adds, "At previous unrated movies we've shown, we haven't had very many teenagers trying to get in. It depends on the content of the movie, but we usually try to run it like the R rating, where we don't allow anyone under 17 to buy a ticket."

Last week, the website CHUD.com announced a contest to "Design the Antichrist poster!", intended to give fans a chance to participate in the film's marketing. Only a day after the contest went up, however, it went right back down, with a note citing a lack of "rules and regulations" as the reasoning for its cancellation. Given both the subject matter and the extreme content of the film, one might venture a guess that IFC got cold feet over the kind of submissions they might receive back (a suggestion laughed off by CHUD critic Devin Faraci, who posted the original contest announcement). Then again, it could also be that, at the end of the day, interest in a joke trailer mash-up exceeds the interest in Antichrist itself. Von Trier's highest grossing film, Dancer in the Dark, only earned $4.1 million ($5.5 million adjusted) in the US back in 2000, and even that tiny profit is no doubt thanks to popular singer Björk in the lead role. Maybe it's not such a huge stretch to call "Chaos Reigns." the new "I Drink Your Milkshake!", but whether Antichrist 's reception is anything like There Will Be Blood 's is yet to be seen.