close
We caught up with Grant Heslov to discuss his debut directorial effort, The Men Who Stare at Goats.

The Man Who Directed 'Goats' 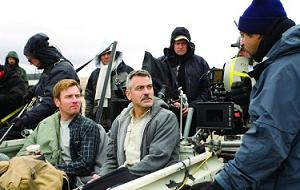 Debut director Grant Heslov has made a name for himself producing smart comedies and dramas with producing partner George Clooney. After Leatherheads and Good Night, and Good Luck., the duo turned their attention to The Men Who Stare at Goats—a riotous true-life tale of a journalist (based on Guardian reporter Jon Ronson) who discovers the military's two-decade investment in psychic warfare.

You had a military consultant, Jim Dever. What was his take on the secrets Jon Ronson uncovered when he read the script?

He loved it. He thought it was funny, and he actually did a little of his own research and realized that the stuff was really true. He was great. First, he was incredibly helpful because I wanted all of the military stuff to be as real as possible. The other part was he knew that we weren't setting out to make fun of the military—it wasn't really about that—but it was interesting that they were involved in this research. It was kind of cool, he thought. He was an interesting guy to have around.

At what point did you realize that this was the script you wanted to do next?

When I first read it. I'd been looking for something to direct and I just loved it. It was exactly the kind of tone that I wanted to tackle—I thought it was really funny and it had some things to say. I thought there were great roles in it and it just seemed like it was right up my alley, at the time. Little did I know...

The films you've worked on blend politics with comedy—how do you take complicated ideas with a lot of relevance and still make them accessible and fun?

For me, the primary thing is for the audience to enjoy themselves, to get a kick out of it and be entertained. I just think a lot of times you can say more—and say it with more potency—with comedy, rather than just hitting people over the head. To try not to take yourself too seriously—when I say 'yourself,' I mean me. As a film-lover and a film-watcher, I've always loved the films that were funny, but it wasn't until later that I got the deeper meaning. Films that take you by surprise—I've always loved those kinds of films. And they inspired me. That's one of the reasons I loved this script so much.

It's a genre that is only now being created. We've had docu-dramas; this is a docu-comedy.

Yeah! I never thought of it that way...

When people walk out of the movie, how much do they believe is true?

That's a good question. It runs the gamut. It does say at the beginning of the film, “More of this is true than you would believe.” Everybody does believe that there is truth in this, but it's so far out that I think people don't actually know. The funny thing is, the most far out stuff in the movie is actually what's true. You've read the book?

When it came out—I'm a huge Jon Ronson fan.

Peter Straughan who adapted the screenplay did a fantastic job of capturing Jon Ronson's tone. The book has a specific tone—all of his work does—which is funny and you enjoy reading it, but it's like “Holy f—k, this is crazy!” I felt like my job the whole time was to find a way to capture that tone and tell that story on film from Jon's voice. To whatever degree or not I was successful, that's what I was trying to do because it's so unique.

That is the actual manual in the film.

Wow. To hold that and realize how real this story was, what was that like?

You can get it online! It's cool, it's fun to read. Jim Channon had some really far out ideas, but when you pull away the far outness, they make sense.

What do you think the world would be like if the First Earth Battalion's ideas had never been corrupted?

I'd like to think that Iraq would have been a different war, but I don't know. There's some bad people out there in the world and I don't know if those techniques would work or not. But I certainly like the idea that at least the military was trying. I'm all for that.

As a director, what were your biggest challenges making this film?

Some of them were the normal challenges: not enough days to shoot, not enough money. The scope of the film was fairly ambitious. We shot it in 42 days in Puerto Rico, New Mexico and California. We had a lot of weather issues. We had a hurricane, a really severe sandstorm, a lot of rain. And snow—in the desert. When it was supposed to be a rocky desert, it started snowing. Weather was the biggest challenge, I would say. And it's a fairly big film with not so many days to film it. But I had great help—such a great DP in Bob Elswit, and such an amazing cast that made my life easy. I had to worry about everything else; I didn't have to worry about those guys. And I had a great crew. It was hard won, but we had a lot of fun.

The scene where George Clooney demonstrates 'sparkly eyes'—what direction did you give him for that?

You know, I didn't really give him any direction. We were at our office in Warner Brothers before we started shooting and I was working with Bob Elswit, and we had a car there because we were trying to figure out what car we were going to use. We were just dicking around, really, and George happened to come out of the office and ask what we were doing. I told him, 'Get in the car—I want to look at lens sizes.' He got in the car and I said to give me the sparkly eyes and he did basically what he did in the film and it just made me laugh. I don't think we ever said anything about it. And then when we shot it, he did another variation of that and it was great. That's what I meant about the actors making it easy—stuff that was better than I imagined when I read it.

You had an ideal cast for all the roles.

I heard you had to find fainting goats that would collapse on cue?

There are these goats that when they hear loud noises, they faint. We had a guy bring some in—in Puerto Rico, they claim they have them. Of course, they wouldn't faint. We ended up having to use real, non-fainting goats. But the fainting goats are pretty wild. I think you can just go on YouTube and look for fainting goats, and there they are.

One of the parts I love about the movie is when we come across the prisoner's torture cell with the strobe lights flashing and the music blasting the Barney theme song. It's horrible. And when Ewan McGregor's character tries to talk about it, the media spins it into a Barney joke, like they did in real life. They were uncomfortable talking about the deeper implications. Are you worried that when people leave this film, they'll do the same, reduce the ideas about psychological warfare into jokes they can handle?

I always felt like, if someone is only going to be entertained by the film, then I'm happy. I do think it could mean more to people who understand what's going on underneath, and I do think there will be people who are disturbed by it and have discussions about it and maybe want to come back and see it again ... or three or four or ten times. There's a lot of things I think you could maybe miss in the film. I definitely don't worry about it, but I'm hopeful people tap into that darker stuff and not just say it's funny and frivolous.

What do you want people to talk about when they're leaving?

Like you said before, how much of this is real? That this unit actually existed and the idea that ideals that are so well-meaning can become perverted, and what that means. Obviously, the idea of how we treat prisoners of war is worth discussing. If people were talking about all of that stuff, it would be great.