close
Author Jon Ronson discusses the adaptation of his beloved book, The Men Who Stare at Goats.

The Origin of 'Goats' 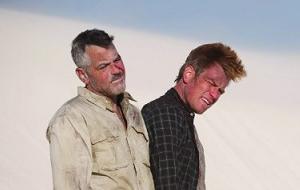 Guardian journalist Jon Ronson's non-fiction book, The Men Who Stare at Goats, uncovered the US Army's secret (and true) history of mental warfare and mind-controlling peace missions—which were eventually warped into modern torture methods. Like his earlier book, Them, a journey into the world of cults and secret societies, Ronson plunged himself into his research, which paid off with a brilliant best-seller that's now become a comedy starring George Clooney, Ewan McGregor, Jeff Bridges and Kevin Spacey. Ronson talks to B OXOFFICE about the method behind his mad adventures, and whether psychic operations could have changed the world.

First, I love your books.

Oh, good! I'm writing a new one right now. It's called Psychopath Test. It's a bit like Them, I think.

Is it about how to tell if someone is a psychopath when they're young?

It's sort of an adventure story, but instead of trying to get into secret rooms and the kind of stuff I did in Them, it's about entering the world of psychopaths who are high in power. It's really cool I think, but I've still got a long way to go.

Do you or your wife ever worry about your safety?

She never seems to worry. I worry. In Them, I was being chased by the Bilderberg group in Portugal and I was really, really scared. I phoned up my wife and said I was feeling like I'd done something wrong, and I was being chased and I might be killed and I just wanted her to know that I loved her very much. And she went, 'Oh, you're loving it!' I go, 'I'm not!' and she goes, 'You're having the best time!' I'm not, I'm not! She never worries—I worry about myself all the time. I'm prone to anxiety anyway, so I'm prone to thinking that something terrible's going to happen any minute. And then stupidly, I spend my life hanging out with incredibly frightening, dangerous people. My wife is so not screwed up—she's psychologically fine—that she doesn't seem to worry at all. Which is kind of weird...?

Speaking of your wife, what was it like to watch a movie version of your life where Ewan McGregor's you is divorcing your wife because she's sleeping with your editor?

Thank god that didn't happen with my wife! Except I watched it with my wife. The honest answer is that me, Elaine and my son Joel, we went to a screening of the movie for Kevin Spacey in London. This was the first time I got to see the movie. They had a special screening for Kevin and his friends and we got invited, and really I was just sitting there watching it as a member of the public, and an audience member. So was my wife and so was Joel. I really didn't see it as my movie. I saw it as, here's a movie—am I going to enjoy it? Within the first three or four minutes, both me and my wife and my son were just leaning back with big smiles on our faces loving it. That was my response to the movie: I just really, really loved it. It's funny. Even at the times where what's happening on the screen is exactly what happened to me, like with the Predator where George Clooney beat up Ewan McGregor with this weird thing. Even in those moments, kind of boringly, I wasn't thinking that this is me up there. I was just thinking that this is a really good movie.

Did you wish your research was as easy as three weird days in Iraq?

That people just come to him! But, you know, at least I wasn't kidnapped by Al Qaeda. What happens to Ewan is worse, though I did harder work. We took a hell of a lot of planes—I think I was on 100 planes during that book.

You were all over the place.

Hawaii and California and New York and Ohio and Maryland. Austin. Jeez, we went to almost all 50 states researching that book. So tired...

You must be an amazing packer.

I wish I was—my packing method is to just throw it all in a suitcase. At least if you show up all crumpled, the person you're interviewing thinks you're just this harmless student. They open up to you. My packing advice as a journalist is to let everything get crumpled. The more crumpled you are, the more non-threatening you are.

Well, the motivation is I've just got this massive work ethic. I just really want to work all the time. It's not like I'm a bad dad—I do spend lots of time with my son—but I really do love working. And the way to get people opening up, I think, is to be genuinely interested in them. All the good stories that I do are stories that I'm really, really interested in. And I think that filters out to the person I'm talking to or hanging out with. And they can respond to that—they know I'm not faking it. Even if they're really horrible people like Nazis, I'm so interested in learning from them, and hanging out with them and being with them that they open up. They're sort of flattered, really? Also also, I do a lot of research. They appreciate the fact that I know what I'm talking about, that I've learned as much about them as possible. I think those are the reasons. Do stories that you're really passionate about. I think that's the key to it because that passion makes the interviewee feel comfortable. As long as you're not a mad stalker.

What do you think the world would be like now if they ideas of the First Earth Battalion hadn't been corrupted, if they stayed the way they were in '81, '82?

You know, as I say in the book, Jim had this exit strategy for Iraq. Just like in the movie, it was all about bringing baby lambs in and sparkly eyes—all that kind of stuff. I think it probably would have worked—it would have worked. I mean, it wouldn't have worked with Al Qaeda, but it would have been a hell of a lot better than just killing a whole load of innocent people. I think of the two, Jim's ideas were better than that. There's that moment in the book where I compare Jim's ideas for getting out of Iraq with the reality of how Paul Bremer [Director of the Office for Reconstruction and Humanitarian Assistance in Iraq, 2003-2004] got out of Iraq. What's nice about the movie is it's warm about Jim. Beyond all the craziness, what these people were trying to do in the '80s was actually really lovely. I like that the movie is warm-hearted about them all—and I think if I really like that, other people will as well. It's sweet-natured.

One of the things I like about the ending is that after you see an Iraqi prisoner terrorized with lights and music, you're expecting this heroic moment of exposure of these psychological operations, and instead it gets turned into this joke on the news.

It's shocking, really, that that happened in real life. That torture was turned into a joke. I almost became a bit of a conspiracy theorist myself—I can't remember if I say this in the book or not, but I wondered whether the reason why they chose children's music and deliberately disseminated it was that they knew it would be treated as a joke. That it would make torture funny. And it worked—right up until Abu Ghraib when torture clearly stopped being funny. I think it's brilliant, actually, that the movie ends with that. It's really sickening.

It makes me wonder what the conversation will be when the film comes out—will they zoom in on only the parts that are funny?

Yeah—it's really interesting. What I really like about that place in the movie is it's such a warm, spirited film and then you've suddenly got this thing that's actually quite horrible. I'm hoping that will really work for the audience. The whole Barney story really surprised me—even the Guardian, the paper I work for, before Abu Ghraib was treating torture as a funny story because of the Barney, because of the musical torture. It's like everybody got taken in—everybody lost their minds, really.

What's the news on the adaptation of Them with Edgar Wright?

I wish I knew! Edgar's finished shooting Scott Pilgrim in Toronto and we're hoping, because Edgar is the perfect director for Them, that he turns his attention to Them next. But he's got these other films he's interested in, Ant Man and a film called The World's End, so we've got of got a three to one chance of being Edgar's next film. There's nothing I can do but cross my fingers. I can see why everyone wants to wait for Edgar. He's a great director, really special. But problem when you're dealing with incredibly brilliant people is they're in demand.

Do you think he would play you, as well?

Actually, I know who they were going to have to play me, but I don't think I can say? It's a really unexpected huge star. But this was a couple of years ago so there's a good chance that that person isn't up there anymore. But I just don't know what's happening with Them —I think it's much more what happens with movies, that just years go by and you don't know what's going on. I think what happened with Goats was unusual. It just got made really, really quickly. It was really lucky that Goats ended up getting made as easy as it did.