close
We caught up with the former stunt woman to discuss her supporting turn in Drew Barrymore's directorial debut. 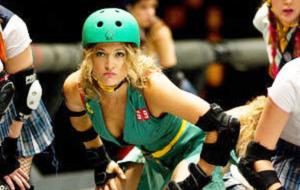 Blondes do have more fun, especially if they're actress and stunt woman Zoe Bell. The New Zealander with the infectious laugh is known for bouncing around the set enthusiastic for the day ahead, whether it's stunt doubling Uma Thurman for Kill Bill, clinging to the hood of a Dodge Challenger in Death Proof, or elbowing her way around the rink as Bloody Holly in Whip It. Bell gives B OXOFFICE her take on being a strong woman in Hollywood (and beyond) and why she was pumped to see a picture of her head Photo-shopped on Sigourney Weaver's body.

This is a film about strong women mentoring the next generation—it reminded me of your relationship with Jeannie Epper [Lynda Carter's stunt double for Wonder Woman, still working at 68].

It's really similar. That's definitely something I liked about the movie—there's mentoring without it being cheesy, stereotypical cliches. It was definitely a similar thing with me and Jeannie. Jeannie came from a world that I had no personal understanding of: the time and the year that she was a woman in a man's world, but also old Hollywood, which never existed in New Zealand. It's really recent that New Zealand had an industry. I think for me with Jeannie, what was most important was appreciating where I get to be. The work that these women did for it to be possible for me to do what I do, and to have it be acceptable. It's like in the movie when you see an older woman, Kristen Wiig's character, who's had problems with her parents and now knows what it's like to be a parent. She can look at this rebellious teenager in Ellen Page and say: I see you, who you are, and you're amazing, but you also need to know that it's not all about you and your parents were once your age. There's that element of someone being in the middle. I've been that to a lot of girls where I'm older than them, but still close enough in age that they can not look at me as the adult. It's changing now that I'm thirty, but back when I was a teenager...[Laughs]

There's that shoulder-punching camaraderie the girls in the film share. Is that how it is for stunt women as well?

I think for stunt people. I've met with a lot of stunt guys and it's the same thing. There is that athlete rough-and-tumble, but one of the things I like about this movie is that my character, for example, is made up all the time. She always looks cute. So she's cute and covered in tats and willing to punch people while wearing dresses and cute shoes. The merging of that: you can be a strong, rough-and-tumble woman, but still be a woman. All of that can be bundled into one. That's definitely a lesson that I currently have been learning the last couple years myself, so it spoke volumes to me.

Tell me about deciding to do the project.

I went in for a nondescript meeting with the casting girls, who are awesome. We're sitting around talking about this and that. I was wearing high heeled boots and tight jeans, all sexy, and one of them goes, 'You've got a great physique! We're doing this roller derby movie...' This was months before they started casting, and I was like, 'Roller derby?! Put my name on the list, please!' I didn't audition or anything, I just started training with the LA Derby Dolls, with Fresh Meat. I thought if they cast me, part of their casting is going to be expecting me to be capable—and I wasn't very capable on skates when I first started! I went on my own for a couple weeks, and then I met Drew and Ellen at a derby match. Drew was like, 'Yay! It's awesome to meet you, I'm so glad you're part of the team!' Wow, I guess I'm properly part of the team? It hadn't been that clear to me. It was obviously clear to her that she wanted me involved before I figured it out. So sweet—in that case, I'm stoked to be part of the team, too.

You grew up on an island with no movie theaters?

We had a town hall where they would drop a sheet and place a whole bunch of chairs. I know, right? It's kind of ironic when you think about it now.

Who were your idols growing up?

I'm bad at favorites. I'm not fanatical about many things. I remember wanting to be like my dad. That was a project we had to do at school, and my dad was the answer to that question. My idols sort of shifted. They were famous people, friends of my parents—people in my life that dealt with situations in a way that I thought was really respectable.

It was your dad who got you into doing stunt work.

In a roundabout way. He came home from the hospital—he was working at an emergency clinic—and he came home with a phone number. I'd been blabbering, 'Stunt people do this! And I saw an article!' Once I became aware of it being a possible career or life style, it's like when you get your first car. Suddenly, you start seeing a hundred of them on the street when you didn't notice them before. You buy a cool pair of shoes, and then you see people everywhere wearing them. I'd started getting a yen for it, and when I'm excited about something, it's pretty clear. So dad had a patient come in who turned out to be a stunt man, and dad said, 'Oh my god, my daughter wants to be one,' and he came home with a number. He locked me outside and was like, 'Don't come back in until you've made this phone call.' That was the phone call that began everything. So, yeah, I blame my dad.

I'm a completely nonathletic person and I walked out of this movie wanting to lift weights. It makes it feel like being a strong, ass-kicking woman is achievable.

That's what like about it, too. Anyone can play roller derby. When you go to an actual match, there's women of all shapes, all sizes, all colors, all ages, all statures, all statuses. It's not just a bunch of skinny, fake-titted women who probably couldn't skate pretending to be on skates.

What is Lingerie Bowl? That actually exists?!

I think they even just started a league?

Shut up! Chicks in lingerie?

What's the sport they play?

Football-ish? In the key of football.

Football and bras? Wow. I'm not going to pass any judgment. I mean, you can be skinny and have fake tits and be an awesome person. But you know what I mean. What happened in this movie is achievable and real—it represents real women.

Those strong thighs in the movie—they can do some damage.

You worked with Neveldine/Taylor [ Crank, Crank 2: High Voltage ] on Gamer. Their style of shooting action is so different than the balletic look of Kill Bill. On set, do you feel a difference in the direction, or it is all editing?

There's definitely different energies depending on the director or depending on the style of the action. With those boys, it's kinetic. When you're on set, it's fast-paced. They're on skates and it's just [snaps fingers fast]. And you party hard and you work hard. That's the way they shoot. When you watch the movie, that's not what it feels like—otherwise, you'd just be exhausted the whole time. And Quentin definitely comes with his own energy. Shooting action movies can be very different than shooting dramas or comedies. Most of the time, once you're in the actual sequence, it's action. You want it to be solid and you want there to be a certain amount of movement. But at the same time, you can't move so fast that you miss steps or people get hurt.

Officially, your debut as an actress was in Death Proof, but Quentin Tarantino first encouraged you to think of yourself as one in Kill Bill.

I've never asked him this question, but I imagine that that's when he started brewing the idea of putting me in a movie as an actor. I clearly remember the first time he asked it of me. He asked me, 'Why are you taking out these six guys?' Because that's my job? 'What's your intention?' Take out the six guys and wait until you say cut? 'No—why do you need to get through them?' To get upstairs? 'Why do you need to get upstairs?' To kill O-Ren? 'Why do you need to kill O-Ren?' Because she f***ed me up! I got it! Suddenly, it was so clear to me. There was one moment when I was on a motorbike and I had to pull it into a shot. It was an acting moment, even though I had a helmet on. I guess he was having a bad day, and I didn't know. I asked him if I could ask him a question, and when he came over, I said, 'I just want to know what's going on for her in this shot?' I saw him smile, but I didn't realize that he'd been in such a shitty mood. He told me afterward, 'You put me in such a good mood—the fact that you were talking like an actress, you have no idea how important that was for me.' F***, that's lucky—I had no idea that was the mood he was in. I imagine that that's when the idea started brewing. But I had no idea about it until the Death Proof script was basically finished. He often has ideas that are sitting and brewing for long periods of gestation.

Your name is on fans' dream team list for Ridley Scott's prequel to Alien.

Wouldn't that be awesome!? That absolutely has to happen. There was an article where someone CGIed my head onto Sigourney Weaver's body. It's kind of creepy, but I liked it. I sent it to my people and was like, 'Make this happen!' That'd be so sick! That's the kind of stuff I would like to do. Linda Hamilton in Terminator and Sigourney Weaver in Alien —those are the kind of roles we don't have enough of.

When Terminator 2 came out, it was this revolution. A detonation went off and everybody wanted to be her.

I know! And then what happened? Where was the next one? Come on, people.

What's next for you? I heard you're playing an Iraq vet?

We've still got that one buzzing around. There a movie called Bitch Slap that's coming out that I want to give a shout out to. It was at TIFF and it comes out January 8th. I'm the stunt coordinator on that. There's a few things in development. I'm looking at a couple projects in New Zealand. I've been really spoiled with the projects that I've been able to work on and the people I've been surrounded with. I don't want to sound spoiled, but I'd like to see if I can maintain that. I'm looking for the next special thing. I'm excited.