close
After the film's strong opening weekend, we may see more adventures featuring Columbus and Tallahassee. 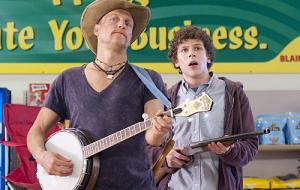 The end of Zombieland, and this isn’t giving much away, sets the stage for a sequel.

Many movies leave the door open for future installments, and horror movies tend to do so with alacrity. And why not? What studio doesn’t dream of kicking off the next Elm Street or Saw franchise?

Zombieland eye-popping grosses over the weekend—just shy of $25 million— could convince Sony it has a franchise on its hands. And who wouldn’t want to see Tallahassee (Woody Harrelson) and Columbus (Jesse Eisenberg) re-team for more zombie-stomping adventures?

It may not be so simple.

The youthful creative team behind the movie—director Ruben Fleischer and screenwriters Paul Wernick and Rhett Reese—may be eager to jump on to another “Zombie” feature. Wernick and Reese indicated as much before the film opened to the MTV Movies blog.

And most young directors would jump at the chance to start their career with a fledgling franchise.

But one of the key elements to the film, beyond the oozing zombies, is the chemistry between Harrelson and Eisenberg.

Harrelson’s career choices rarely fit the movie star template. He’s done silly comedies ( Kingpin ) and micro-indies ( Transsiberian ) and there’s not a sequel on his resume. He even admitted he was reluctant to take on a project like Zombieland initially for fear it was just another genre exercise.

Yet the screenwriters told MTV the Cheers alum indicated he would consider a sequel to the film, something he's never considered before.

But what if Harrelson's other projects get in the way of the shooting schedule? Sequels tend to be shot on the fly—just look at how quickly a Twilight sequel came to be. And Hollywood delivers another Saw movie each year without fail. Harrelson is suddenly in demand again, and even if he wanted to return as Tallahassee his workload might not permit it.

But horror movies don’t have to bring back their stars to secure future success. Slasher films routinely recruit new actors to enliven them—and supply the killers in question with fresh targets.

Plus, the template Fleischer and crew created with Zombieland seems like it could easily plug in new cast members without losing the zany spirit of the original. All you need to bring back are those hard charging zombies and the breezy spirit which helps audiences deal with the gore and mayhem.

Sean Phillips, executive producer of Yahoo! Movies, sees no reason Zombieland won't spawn a franchise. Sony, the studio behind the film, embraces the concept as evidenced by the Spider-Man and Da Vinci Code features, Phillips says.

Phillips also predicts the cast will return for an encore. They all seemed to be having a blast, he says and as a buddy comedy "not to see those guys in it again would be disappointing."

Such a sequel might do better than Survival of the Dead, the upcoming zombie feature from undead guru George A. Romero.

The director’s zombie features set the gold standard for horror films, with films like Night of the Living Dead and Dawn of the Dead standing out as horror classics. Lately, audiences seem less interested in his take on the genre he helped create.

His last zombie film, Diary of the Dead, earned less than $1 million from a peak of 48 locations.

Zombieland takes a firm stand on the most pressing issue facing modern undead movies—its zombies all but run to chase their prey. The zombies of yore, specifically those created by Romero, tend to stumble along until they find their latest snack.

Maybe the success of Zombieland, and 2002's 28 Days Later before it, signal audiences won’t stand for shuffling zombies any longer.