close
By making audiences laugh, The Men Who Stare at Goats may just end the current stigma around military flicks.

A Different Side of War 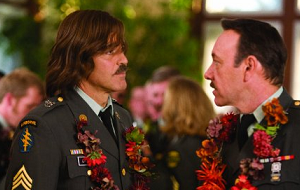 Another war movie is coming to theaters this weekend—duck!

War films, particularly those dealing with aspects of the Iraq War, have crashed and burned at the box office with alarming regularity.

Stop-Loss. In the Valley of Elah. Lions for Lambs.

So Hollywood decided to throw audiences a curveball. The Men Who Stare at Goats, starring George Clooney and Kevin Spacey, tells the true story of a CIA effort to use paranormal powers on the battlefield. And yes, soldiers do stare at goats in the process.

Hezekiah Lewis, a director and film professor at Villanova’s School of Communication, says audiences want a twist on the modern war-related film.

“We need a different outlet, a different take,” Lewis says, which helps explain why a film like Goats got greenlit.

Even a film like the upcoming drama The Messenger, which features the soldiers asked to inform families that their loved ones have died on the battlefield, represents a glimmer of hope for Hollywood’s attempt at reflecting war.

Part of the problem stems from the nature of modern war. Even the most optimistic audiences can’t see an end to the War on Terror any time soon, nor to the conflicts in Iraq and Afghanistan.

“It’s hard to tell if we will get that sense of closure,” adds Lewis, something that makes telling war stories on film all the more challenging.

“I think this particular war is so unpopular and so close to home that films concerning it aren’t digestible as of now,” Sharrett says. “Maybe in five years [it will be].”

One way to approach war movies is to do so from a more generic anti-authoritative vantage point, he says. Consider In the Loop a moderately successful indie film from earlier this year that mocked the military power structure rather than any one given conflict.

Films that aren’t anchored in the crisis of the presence moment that avoid directly showing a loss of life have a better chance of thriving, he says.

It helps that a film like Goats is set partly during the Vietnam War, which allows for a measure of distance to today's headlines, he says, adding it stops people from agonizing over the present. Hollywood is likely better off sticking to films containing symbols and metaphors of current foreign policy matters rather than directly engaging them, he says.

Sharrett says it’s hard to predict if The Men Who Stare at Goats will resonate with audiences—or if enough people will be able to see it.

“A lot of it depends on distribution,” he says. “Given it’s a comedy with popular stars it may do fairly well, like Burn After Reading.”