close
Universal's thriller The Fourth Kind will try to grab the same patrons that have made Paranormal Activity a hit.

A New 'Kind' of Terror 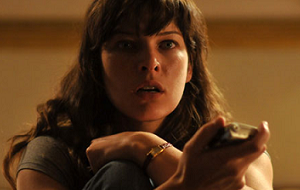 Ten years after The Blair Witch Project startled audiences the impact of horror verite is still being felt.

The runaway success of Paranormal Activity, the no stars, no budget, single cam horror flick is further proof that audiences crave a semblance of reality in their escapist horror films.

Most moviegoers understand the actors in Activity are just that—actors. But the film’s premise, that the video we’re about to see was found by local law enforcement, gives it an eerie sense of reality that Freddy, Michael and Jason could never evoke.

So it’s fortuitous that The Fourth Kind, which details the disappearances of several people in Alaska, is coming so closely on the heels of “Activity.”

Kind, while eschewing the single-cam approach and using a recognizable star like Milla Jovovich, nonetheless plays up the fact that it’s based on real events.

“Every scene in the movie is supported by archive footage,” says Jovovich in a trailer playing on the movie’s official web site.

Does it matter if that message is real or just marketing hype?

Catherine Zimmer, Assistant Professor of the Film and Screen Studies Program at Pace University, says movies like The Blair Witch Project can be quite effective in tricking even today’s savvy audiences.

Zimmer recently showed Blair Witch to her film class and one of her students sheepishly asked afterward if the events in the film were real.

“It’s amazing how much power that still has,” Zimmer says. “That mode of marketing still has a fair amount of power.”

Zimmer, currently working on a book about surveillance films and their intersection with the horror genre, says our reality television culture is helping to enhance the scares of films like The Fourth Kind and Paranormal Activity.

Seeing horror through the filter of a shaky, grainy camera, one without the bells and whistles of a feature film, intensifies the jolts for today’s audiences.

“Even though we’re cynical, it’s that technological look that is reality to us,” she says. “It’s somehow bringing in the reality of our mediated existence home to us.”

Activity is just the latest example of Hollywood scaring us with tools of a modern age.

“Horror is always that place where you’re processing what technologies can do and how they can be scary,” she says.

The communal experience of watching a movie today has been augmented by sharing stories about the films in question online. It’s not just being scared in a darkened theater anymore—it’s downloading the spooky trailer that hints that the movie in question has a kernel of truth to it.

Zimmer doesn’t think the horror verite effect alone can propel a project like The Fourth Kind to the kind of box office Activity is drumming up.

“I don’t think the reality effect, the blurring of fiction and reality, is enough to do well at the box office.” she says. “Sometimes you don’t know when something is gonna hit.”