close
After a series of flops, the success of 2012 has put John Cusack back in the mainstream. 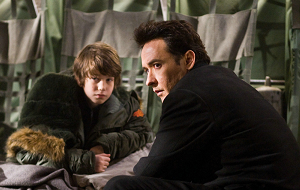 He may have shot Will Smith to fame and fortune, but Roland Emmerich knows that his films' spectacular action—primarily the destruction of famous U.S. landmarks—has more pull than a megastar. As the director of such films as Independence Day and The Day After Tomorrow, Emmerich has slyly leaned toward character actors and genre stars to headline his movies: recognizable people, certainly, but not necessarily the kind of names that guarantee a massive opening weekend. Having floundered at the box office with the completely star-less 2008 prehistoric epic 10,000 B.C., Emmerich has landed another hit with 2012, a return to both his disaster-movie roots and his technique of shying away from the conventional action hero, tapping John Cusack to play the divorced father of two kids who rushes to save his family from certain doom.

Conventionally, Cusack is known as a romantic comedy star, having made his name in the 1980's off of projects like The Sure Thing, Better Off Dead... and Cameron Crowe's Say Anything... (currently celebrating its 20th anniversary). Over time, Cusack gained more traction as a dramatic actor, appearing in Clint Eastwood's adaptation of Midnight in the Garden of Good and Evil and the Hitler drama Max, but the actor still stuck to his strengths through the 90's and into the 21st century with projects like Grosse Pointe Blank and High Fidelity. In general, his strategy has proven more "reliable" than "bankable", with these older movies settling in the range of about $25 million (unadjusted for inflation).

Recently, the actor has been branching out a bit, appearing wide-ranging films like the Stephen King thriller 1408, Harold Ramis' violent, pitch-black comedy The Ice Harvest and the family dramedy The Martian Child. The shake-up proved moderately successful, bringing Cusack's average gross closer to $50 million, but the actor's last two live-action projects, the Iraq military tearjerker Grace is Gone and War, Inc., a spritual Grosse Pointe Blank sequel, earned only $50,899 and $580,862 at the box office, respectively. Since then, he voiced the title character in the animated comedy Igor, which racked up a modest $19.5 million, and it seems unlikely that Cusack—"reliable" rather than "bankable"—would be desperate for a hit, but now that 2012 ranks among the year's most successful movies, thing may change for Cusack.

Cusack only has one other pure action movie under his belt, the 1997 Jerry Bruckheimer production Con Air, which grossed $101 million domestically (approximately $160 million when adjusted for inflation) -- the highest box-office take on the actor's resume and the only project of his to break $100 million. But Con Air had the benefit of co-star John Malkovich and headliner Nicolas Cage to take the weight off of Cusack's shoulders, begging the question: will casting against type work out?

"I think producers are realizing it's more fun to cast an 'everyman' as the lead in an action film rather than a buff action hero who only a small percentage of the population can relate to," says Jenelle Riley, National Film & Television Editor for Back Stage magazine.

No doubt Emmerich, busy handling the massive technical challenge of mounting a film like 2012, appreciates not having to worry about his lead. Even if the audience won't rush to see a John Cusack film, his career lacks most of the massive peaks and valleys most performers experience over the same amount of time, and he probably doesn't demand much of Emmerich's time.

2012 will easily become more successful than Con Air, but it also seems unlikely to increase (or decrease) Cusack's modest but healthy relationship with audiences (2010's R-rated comedy Hot Tub Time Machine, with Chevy Chase and Pineapple Express co-star Craig Robinson, will probably prove to be a better calling card). Meanwhile, Cusack looks for more projects, hinting to website io9 that he would be interested in playing the villain in the adaptation of Garth Ennis' violent, darkly-funny comic book Preacher, which director Sam Mendes is attached to. For some actors, a bleak role would be a risky proposition, but in tough financial times, compared to traditional box-office behemoths that add millions to a movie's bottom line, Cusack represents something better than audience pull: a safe bet.