close
The Box plays on the recent financial woes plaguing moviegoers. Is the bad economy a commercially viable subject? 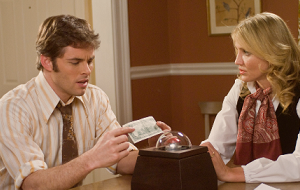 The new Cameron Diaz thriller The Box is a movie for our recession wracked age—even if it's set in the 1970s. The beautiful actress plays a woman who makes an ugly choice when her financial house of cards collapses around her.

The film, co-starring James Marsden and Frank Langella, boasts a live-wire trailer and a doozy of a mystery.

But is it hitting too close to the bone given the current state of the economy?

Films often fail to capture the current zeitgeist for an obvious reason—it typically takes several years to go from a first draft to a finished movie. Sometimes the gestation process can last more than a decade.

Occasionally, a film comes out at precisely the right time, like Saw VI ’s assault on the insurance agency in the middle of the raging health care debate.

Will audiences appreciate escapist entertainment that reminds them of their failing 401K accounts, or is it precisely the right tonic for an ailing economy?

If Capitalism: A Love Story is any indication, “The Box” might see its box office tally downsized.

“The last thing they want to see is a story of economic hardship,” Medved says, pointing to the flat box office tally for last winter’s Confessions of a Shopaholic.

“You’re paying some serious money to go to the movie these days. You want to make sure you’re getting your money’s worth,” he says. “Do you want to be reminded that money is tight and I just spent 10 dollars on a movie?”

The same held true over the summer for “disease” movies like Funny People and My Sister’s Keeper, also starring Diaz.

“Anything that feels like a downer” is having a harder time coaxing audiences into theaters, he says.

Another 2009 film which seemed to hit theaters at precisely the perfect time also bombed.

The International cast Clive Owen and Naomi Watts as a duo trying to take down crooked bankers. The film’s backers couldn’t have asked for a better release date, since the banking crisis hit a fever pitch when the film first hit theaters last January.

Instead, the film flopped.

“You would think Capitalism or The International would be a zeitgeist films that would catch fire with the movie-going public,” he says. “In both cases those films were too timely, too soon, too raw.”

Some films are able to thread the needle, delivering harrowing stories with enough redemption to enlist tentative movie goers. Tyler Perry’s films often deal with economic hardships, but by the final reel the protagonists have usually persevered through a combination of faith and family.

“Perry’s movies … are ultimately uplifting with a glimmer of hope,” he says.

Every year a serious Oscar contender manages to impact audiences despite a sobering narrative.

This year's entry could be Precious: Based on the Novel Push by Sapphire, which focuses on an obese, physically abused teenager just trying to survive under harsh economic conditions. The film deals with depressing subject matter but packs a kernel of hope to offset the sadness.