close
We take a look at some of the little films that are gaining a lot of buzz this awards season. 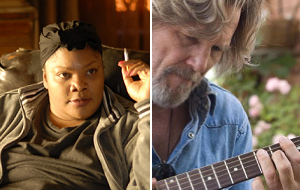 Director Lee Daniels is candid in conversation, quick with a funny line and quicker to tease his own mother for crediting his film Precious to its executive producer, Tyler Perry.

But when the subject of the Oscars comes up, he gets uncomfortable.

And he says he knows enough Oscar voters to understand they feel the same way.

Yet his independent film, Precious: Based on the Novel "Push" by Sapphire, is getting precisely that brand of hype from the entertainment press and critics alike.

Like it or not, Daniels should prepare for an onslaught of both intense Oscar speculations and a nomination or two. Maybe more.

His new film, currently playing in select theaters nationwide, features a blistering performance by Mo’Nique as the abusive mother of an obese Harlem teen. The film also features a heartbreaking turn from its lead actress, the heretofore unknown Gabourey Sidibe.

Precious will have to compete with the likes of The Lovely Bones, Invictus and other movies made by major studios. But in recent years indie films have stood tall against their big pocketed competition, and this year may not be much different.

While Daniels’ film has been garnering buzz all year, another indie rich with Oscar potential is getting attention later in the game.

The upcoming film Crazy Heart, starring Jeff Bridges as a broken down country singer, suddenly secured a prime release date of December 16 in order to qualify for Oscar consideration. The indie film, from writer/director Scott Cooper, also stars an actor who won his own Oscar for portraying an aging country crooner— Tender Mercies ' Robert Duvall.

Most Iraq War-themed films have faired poorly with both critics and crowds, yet this year’s The Hurt Locker could squeeze into the suddenly spacious Best Picture category. The film, which follows an elite bomb disposal unit, also could score a Best Actor nomination for Jeremy Renner’s terrific portrayal of the lead bomb expert.

Other indie films with Oscar buzz this year include An Education, starring Peter Sarsgaard and Carey Mulligan, and The Young Victoria, a film offering the juiciest role to date for actress Emily Blunt.

It’s hard to bet against an Oscar favorite like Clint Eastwood, whose Invictus is at the top of most Oscar lists even though very few folks have actually seen it. But independent movies remain the scrappy underdogs which routinely walk home the winner.

Despite Precious ’ difficult themes, Daniels says he had a relatively easy time finding backers for the project.

“People were actually asking me to invest in the film,” he says. And that’s just how he wanted to play it. “I knew the studios would never make a movie like this, so I didn’t bother going there."

Now, he’s got a film dripping with Oscar potential being promoted by the likes of Tyler Perry and Oprah Winfrey. Daniels is delighted, but also torn about their support.

“Parts of me want Oprah and Tyler to ring the bell, but I want people to find it on their own,” he says.

If Precious ends up empty handed on Oscar night it won’t be the end of the world for Daniels.

“All of my awards came when the writer of the book cried in my arms [after seeing the movie], when we got into Sundance and got accepted into Cannes … and when people admitted to me they abused their kids physically,” he says. “I don’t think any award will top that.”