close
We caught up with character actor Stephen Lang to discuss his role as Col. Quaritch in James Cameron's Avatar. 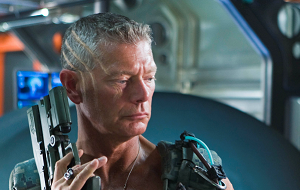 2009 has been the Year of the Lang with veteran actor Stephen Lang landing three standout roles in Public Enemies, The Men Who Stare at Goats and Avatar. Starring in Jim Cameron's incredibly anticipated blockbuster would be a wild ride for any actor—and for Lang, his ride started twenty years ago with a failed audition for Aliens. Lang talks to B OXOFFICE about how small steps can lead to big parts and why he loves his killer Colonel.

You're often cast as a military man.

I guess it's because I have good posture? You go through phrases, and apparently I've been working through a military phrase for a while.

It might be your biceps. Your IMDb picture is very intimidating—the one in the wife beater.

When I go into my gym, I seem to be surrounded by these young guys whose biceps are three times as big as mine. That photo is from Beyond Glory, my solo military show. It's a play I wrote about the Medal of Honor. I play eight living recipients of the award from World War II to Korea to Vietnam—different ethnicities and different services. I suppose that maybe relates to why I get cast as military. The thematic stuff is just really interesting to me, themes of commitment and courage and mission.

Shooting Avatar must have been like theater—the backdrops aren't there and you have to dredge up the world you see from imagination.

That's actually a very perceptive comment to make. Very much so. I've been asked about the technology of working in performance capture, but actually it's acting at its most fundamental. As you say, you're thrown on your talent of imagination because you're acting in what is essentially a rehearsal space. The first time I went into the performance capture arena—which they call The Volume—I said, 'What is this?' It doesn't bear a resemblance to a movie set. It's just what it is; everything is rudimentary in terms of props. It very much has a lot of theater—it's getting to the fundamentals of acting.

How does that affect your technique when interacting with everything from humans to robotics?

I think it requires tremendous focus, for one thing. Also, the relationship between yourself and the camera becomes quite critical. So much of the time, what you're doing is then going to be translated graphically, and so the distances are very critical. We always talk about hitting our marks, but in performance capture, you really do have to hit your mark. I remember a couple of times where I would be firing my weapon at some escaping predator and you really need to aim carefully. In a way, you have to be more precise than if something was actually there to shoot at. It requires focus, the usual exercise, imagination, and trust and faith in the director. Many times as I would be doing something, Jim would be talking to me, saying, 'Up on your right!' You just have to respond. It's a different kind of being in the moment.

That sounds almost like improv. You're running in one direction and he's yelling, 'There's a giant insect dive-bombing you.'

There's a pretty heavy dose of improvisation that goes into it. I haven't done it with any other direction, but Cameron is extremely improvisational. He really wants you to bring it all, bring your ideas. And he's certainly not shy about throwing his ideas at you mid-stream—it's a lot of fun. Very challenging.

Sigourney Weaver called your character, “One of the great all-time villains.” How would you describe him?

He's a villain? I didn't know that! I love him. He's a man with a mission is what he is. And he recognizes the fact that he's doomed on a daily basis to some degree of failure. His mission is security in an inherently insecure place. His mission is domesticating something that is undomesticatable. In a sense, it's not so different than some of the missions that some of our people have now: doing things they weren't intended to do. But I love him. He's got a piercing intelligence, he's dry, he wants to do his job well. And what I think gives him some added tang and depth is that something has been truncated in him, something has been cut out and cauterized. It has to do with his soul. I'm kind of speaking outside of the guy now—this isn't really playable. But I think in his history on earth, in so many ways, he's the picture, the model, the ideal of a Marine in terms of his conditioning, his abilities and his commitment. We've projected ourselves onto a future where there are no rules of engagement. That is the rule of engagement: there are no rules. And so every war that he's participated in was a filthy war. Not that there are great wars, but there are wars that have been fought for great reasons and wars that are fought with some degree of dignity. But in this time, wars are just as filthy as can be. What that does is it kills or perverts a part of you. The history of him is three wars in very rough places—a career of over 20 years in the Corps—and that does something to you, it twists you. And now he goes to a place where he has to secure a planet. He's responsible for the security of his people. I think just because of who he is, what he's become, he very remorselessly adopts some fairly brutal tactics.

I know that's gone around. It's truly the only time I'd ever met Jim before. I certainly remembered meeting Jim. I don't particularly remember the audition—I didn't get the part. I went on and did something else. I remember while he was doing that, I was down in the Everglades doing Band of the Hand... where I was playing a military guy. He remembered, and I as understand it, Jim saw that muscle shirt picture you referred to and that sparked him. I got a call and he reminded me of my audition years ago. We took it from there and began talking about the character. He asked me if I'd come out and meet him for a little work session, and that's how it came about. I think that without that audition 20 years ago, I probably wouldn't be doing this today—it worked out pretty good.

It's amazing the way things add up. One picture here, one audition there...

That happens all the time in some form or another. It's a really good lesson—not just for actors, but certainly for actors about just putting in the time, doing your work and staying on top of it.

There's so much focus on this film. And on Avatar Day, your speech was the very first scene they showed.

They like to open with that scene because it provides a context. I'm giving a talk where I'm talking about the dangers of this place—it's Pandora 101. It's funny now because I've been with the film since June of 2007. That's over two years and we've all been anticipating this December 18th date where this film is going to open for the world. I just am thrilled with the whole process: with the making of the film, with the colleagues that I've worked with. Truthfully, they're just so good. The cast and the whole creative staff has been so great to work with. It's been an adventure and if it all just stopped, it would still be just great. But I'll be curious to see what kind of impact it does have. It's difficult to live up to whatever those expectations may be because of the tremendous success Jim has had and the duration since his last film. That plays into it heavily. The bar is set very, very high for this film, but I don' t think he would want it any other way, to tell you the truth. You know that phrase in poker, 'I'm all in'? I feel like we're all in on this.

While you were shooting it, was it like being on jury duty for a high profile case? To be so invested in something that you can't talk about?

That came with the territory. I got so used to not talking about it that even now when we're quite free to talk about anything, I'm always doing a little editorializing my mind. I had to go through a confidentiality thing to read the script—it was a magillah. I think that's been one of the reasons why it's such a pleasure to show people pieces of it at CineExpo and ComicCon. It's unreal, too. I've been doing this a long time and I've learned over the years to be very temperate in my expectations for things. For example, I'm quite surprised with the public reaction my character has gotten in Goats —and in Public Enemies. Neither of them are very large roles and my expectation, if you're doing a film with Johnny Depp and Christian Bale, is you don't go into it expecting to be singled out. We'll see. I know that people have expectations, but I'm just looking forward to the opening. I take a lot of pleasure of it for my family. My wife and kids have been on this whole ride with me. They've seen great things in my career with me—and also terrible things—so we're all looking forward to this moment.

What can you tell me about the video game?

I don't play a lot of video games, so I don't know how to judge it. I'm waiting for my sons to grade it for me. It's pretty good, I think. You have to get to Level Three to get to me, so I guess you have to be pretty good to meet the Colonel. They unveiled it in Vegas and it looks pretty great—it looks like Pandora, they've done a good job. I've been told it's a lot of fun to play!

What would you do if you could wear the Colonel's giant robotic Armored Military Platform, his AMP, for a day?

[Sinister laugh] Actually, I think I'd take a walk around Manhattan. Stride down Broadway with it. I don't think I'd want to hurt anybody. I might go to Times Square and do a really advanced karate kata. They're very nimble, you know. They look like they might be clumsy, but they're not.

You could really scare the Naked Cowboy.

That guy's got more guts than anybody in the world! He's got some stones to stand out there and do that. Good for him!