close
Summit's vampire flick has broken a record at the box office for midnight shows. 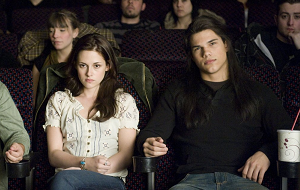 UPDATE: With $26,270,000 from midnight shows, New Moon shattered the midnight screening record of $22.2 million set by Harry Potter and the Half-Blood Prince this past summer. The vampire flick is set to sell more than 10 tickets per second today on Fandango.com, where it currently accounts for a whopping 85 percent of sales.

America's obsession with New Moon is reaching a fever pitch. Thousands of midnight shows across the country were sold out, and that's not just in the major cities. If early reports are any indication, the Summit release may have set a new midnight record by topping Harry Potter and the Half-Blood Prince 's haul of $22.2 million. We were able to get some reactions from some smaller locations where the Twilight craze is still very palpable.

" New Moon was an event last night at every theater where midnight shows were available. All theaters were sold out and the audiences loved it," says Jeff Kaufman, Senior VP Film and Film Marketing at Malco Theatres, a Southern chain with 31 locations. "The excitement also extended to our smaller markets like Oxford and Corinth [both in Mississippi] and Van Buren, AK where midnight sellouts are rare."

When I was sitting in the theater awaiting New Moon, one of seven long since sold-out screens reserved for the film at the AMC I attended, and among "Twihards" who had been waiting for eight hours (!) just to get a good seat, the anticipation was getting violent. It became like the end of Gremlins, when all of the gremlins are packed into a movie theater, laughing for no evident reason, throwing popcorn, having small inexplicable temper tantrums and screaming intermittently. Just substitute the gremlins for teenage girls, their vaguely uncomfortable boyfriends, some zealous moms in “Team Edward” t-shirts and, perhaps the oddest breed of all, the balding “TwiDads,” and you have the opening midnight screening of The The Twilight Saga: New Moon in Tallahassee, Florida.

“It’s just fun,” said Twilight fan Elizabeth Stein, who was 21, a few years older than the average Twihard attendee that night. “I mean, if you like the books enough then you get really excited about it; you don’t—you don’t want to wait. It’s fun to go see the first showing… [Although] I kind of wish I didn’t have to see it with a bunch of screaming children.”

From Cinema Center 3 in Newark, Delaware, by Katherine Guiney:

Cinema Center 3 became a sea of Uggs and leggings Thursday night, as tons of female fans turned out for a midnight showing of The Twilight Saga: New Moon. And though the movie did not begin until midnight, many, if not most, arrived to the theater an hour or more ahead of time to secure tickets and good seats.

Kelsy Evans and Christa Sullivan, who both arrived early with friends, could not hold back their excitement for the film.

Evans and Sullivan, both college students who’ve read all of the books in Stephanie Meyer’s Twilight series, had high expectations for New Moon.

“Last year’s was disappointing … I’m banking on this one being better,” Sullivan said, citing the addition of Dakota Fanning and Michael Sheen as obvious improvements.

“The previews looked really good,” Costelloe said, “I’ll be pissed if it’s not.”

Costelloe, who did not get to see Twilight on opening day last year, said she could not miss the opportunity to be at the Cinema Center, an independent theater, on opening night this time around.

Costelloe did not have to wait long to see Robert Pattinson in action, as he graced the screen even before the film began in a preview for Remember Me, garnering premature woos and ahhs.

Although the Cinema’s midnight showing of New Moon, which played on the largest of the Center’s three screens, did not sell out like it did at most Delaware area theaters, it did not disappoint fans in the end.

The excitement palpable before the film began was just as present when it was over. Moviegoers left describing the New Moon as “good” and “amazing,” some planning on when they can go catch the movie again.